It was becoming a beautiful day. The prediction had been for damp and cold, but the actual weather looked increasingly great. I spread an alert through the new Somme 2030 stewards. "Anyone free to do some planning, exploration, and loving the ecosystem, before the cold comes?"

Part of our thought was that it might be the perfect day to find and mark (and protect from slaughter) a beautiful little viburnum tree called black haw. This could be important, because the new mission of Somme 2030 (also called the "Somme Revival Party") was to restore 150 acres of rare oak woodland and wetland habitat, and most efforts fail when it comes to the plum trees, hazelnuts, and black haws that may have been a crucial part of the habitat.

Would anyone be free at the last minute? It turns out that Travis had already scheduled a day off - and both Michael and Josh managed to wiggle out of whatever, and now we four assembled in the wilderness of Somme East to plan the future.

Why do haw, plum, and hazelnut need help? First, because they've been nearly obliterated by the shade of invasive trees (from buckthorn to maple) that - in the absence of fire - destroy the richness of the oak woodlands. Second, because now that we're starting to restore the habitat, our controlled burns will also unfortunately kill the few native shrubs that survive. And last, because eager-to-be-helpful brush cutters will snip them if they're not marked, when they cut the buckthorn. 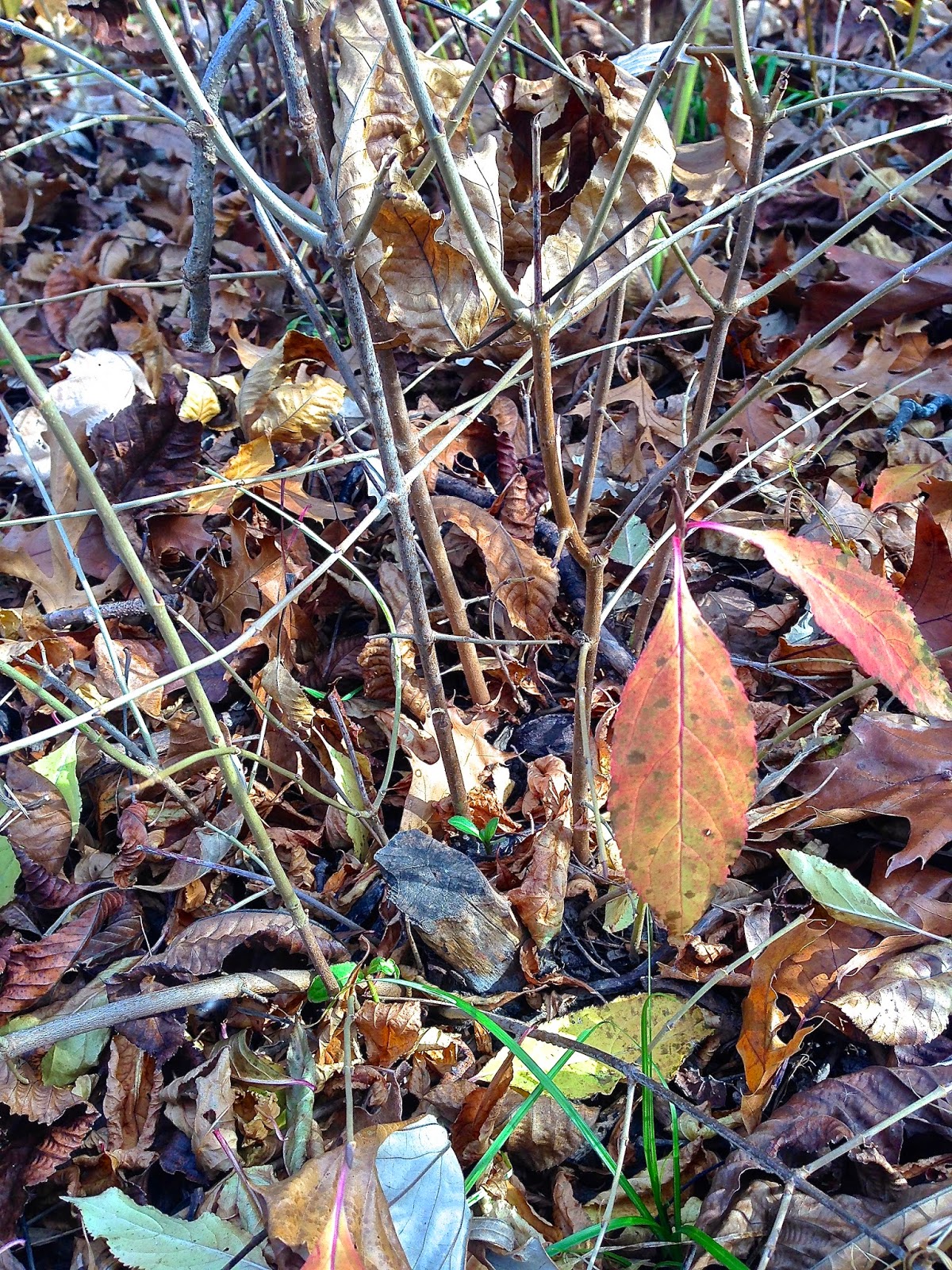 Oh, they may not look like much now, but the color of those two surviving leaves give away a patch of one- to four-foot-tall black haw sprouts, scattered over an area the size of a house. If protected, this shrub thicket could be twenty feet tall by 2030. It could bear the nests of blue-winged warblers, eastern towhees, black-billed cuckoos and other now-rare birds that once helped the woods to thrive.

The blue-black fruits
of the haw (on their bright red stems) would once again be eagerly devoured, in the words of Donald Culross Peattie, by "gray foxes, white-tailed deer, bobwhites, wood-wandering boys, and botanists." (But why do wood-wantering girls get left out?)


When we'd find a patch of black haw, we'd record the location on cell phone GPS, tie ribbons on the young trunks (so lopper-wielding brush cutters could avoid them) and rake leaves away - because - we hoped - if all went well - this whole area would soon be treated to a prescribed burn by Forest Preserve staff or contractors.

Did we really think that would happen? Sure, we'd made the request earlier this fall. Forest preserve restoration has indeed been getting better and better. But we've also been disappointed. And this large area has never been burned since the days of the bison and the Potawatomi.

That's when the miracle happened. We were intent, focused, thinking through plans, tying ribbons, raking leaves - and having a harder and harder time hearing each other's voices - because distant trucks or trains or some ungodly noise was getting louder and louder. Suddenly Travis said, "Leaf blower!"

Really? Out in the middle of the forest? Two of us immediately knew what that meant. Staff were making fire breaks, right where we'd hoped. At first we assumed the breaks were being prepared for another day. But then we saw growing billows of smoke. What serendipity! It was happening now!

Many people might think perhaps we'd be scared. But a woods fire on a calm day like this moves at the speed of a very ill patient with a walker. The average person could crawl out of the way. You could hop over it. You could walk through it, stepping briefly right in the flames for that matter, if you were wearing clothes and footwear not made of petroleum. Not that anyone would recommend it. But the level of danger is trivial. Don't lie down in the flames, and you're okay. (On the other hand, don't try the "walking through fire" trick with "synthetics." Some melt. Some burn.)

How about the worry that the fire will "get out of control" and burn down buildings? Here we can first look at the record. All the region's conservation agencies burn their prairies and oaks woods, and no fire has escaped to burn down buildings. The reasons are simple. Competence and firebreaks. 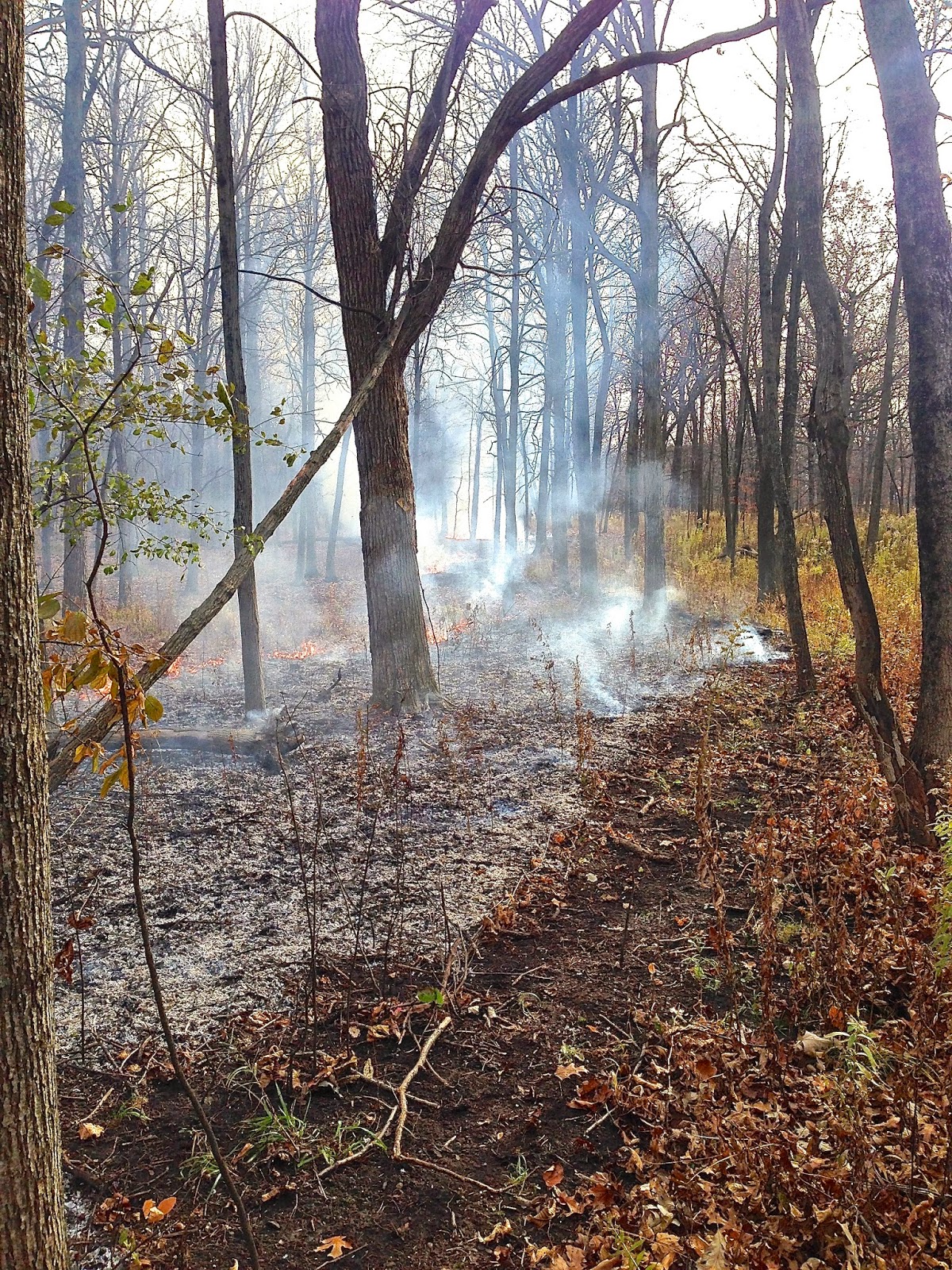 Before the burn was lit, those leaf blowers emptied a narrow strip of soil of any flammable leaves, wood, or anything else.
In the photo on the left you can barely see the leaf-blown area to the right of the black. But look how effective it was.

It works because the person spreading the fire starts it right on that edge, and other crew with water backpack pumps are carefully watching to make sure no hint of flame tries to sneak across.

Once the fire has burned a few feet in, leaving behind a black area of no fuel, the woods outside the break are safe.

Notice the little flames moving left in the photo. The farther they get, the safer the area outside the break.

(On the other hand, "don't try this at home." There are many dangers that are not obvious to the untrained. Only people with extensive training and expertise can do controlled burns.)

Perhaps this is the time to consider the "cost" or "harm" of such a fire - compared to the benefits. People with respiratory problems should stay out of the smoke, but they could just walk away. Air pollution is indeed a cost. We'd all prefer no air pollution, but we degrade the air by driving our cars (or taking the bus or train). We increase carbon dioxide in the atmosphere every time we breathe. We put particulates in the air every time we have a cook-out or burn a fire in a fireplace. We as a culture have decided that some benefits outweigh some costs.

Insidiously, "invasive" or "malignant" species began progressively to destroy all these values. Only in recent decades have we gradually come to understand that an impenetrable thorn thicket where an open woodland used to be was not "nature" or "natural" or good. Fire restores the plant community, animal habitat, and ecosystem services.

The most obvious benefit is the control of buckthorn. This small tree - in the absence of fire - destroys animal habitat and shades out the grasses and wildflowers so severely that even the soil erodes off and clogs streams, lakes, and ultimately the Gulf of Mexico. After this fire, not only will the buckthorn be reduced, but the thick mat of leaves will uncover the soil just long enough to seed. Right away Travis, Michael, Josh and the rest of the Somme Revival Party will plant the rare seeds they've been gathering all summer and fall. Next spring they'll sprout in perfect conditions. Healing has begun.

If you checked out the Somme Facebook page, you might have seen the video of this fire in which
burn boss Evan Barker seems to be walking through the woods spreading fire at random. That too deserves comment.

For millions of years, grasslands and oak woodlands burned from fires ignited by lightning. Most of the grasses, leaves, and dead trees were then burned by fires spreading with the wind on the very driest, hottest, windiest days. Considering how slowly today's tamer fires are spreading, large areas like Somme east (150 acres) would have to burn for days if a single fire were to spread slowly on its own. So a drip torch is used to start new lines of flame, back and forth through all the key areas. This fire will spread in out in both directions, burning the leaf litter (and many invasives) from the entire area of this photo in ten or fifteen minutes.

Wonderful day. Now we approach about the future with greater hope and confidence.

What comes next? First finish gathering, and then broadcasting, all that crucial seed.
Then cutting bigger brush and burning it in bonfires throughout the cold winter.
Then more study, planning, and month to month of rewarding stewardship in the beautiful and recovering Somme Woods (inspired in part by the pilot work to the west in Somme Prairie Grove).
A worthy, wonderful, and generous dream.
Whether you end up calling yourselves Somme 2030 or the Somme Revival Party or whatever ...
... thank you and best of wishes in your noble quest.
Posted by Stephen Packard at 9:42 AM

The ways burns are conducted have changed considerably since you used to do them. We can no longer start a field on fire and return a few hours later to put out the remaining flames creeping through surrounding woodlands.

Prescribed burns are now more like a military exercise.

“I need three backpack sprayers on this line.”

“Drip the torch along this trail.”

A prescribe fire crew member faces all the dangers of a fire fighter and a logger both at the same time. The burn boss has all the stress of an air traffic controller. They seem to age at the rate of a president.

Why do they do it? There is just something awe inspiring about fire. Also, there is nothing quite like the smell afterwards. After a fire the woods smell like roast tea, if there was such a thing.

However, I do think it was more fun before we had to worry so much about everything.

James, I can't imagine how you got the impression that in the past we'd "start a field on fire and return a few hours later to put out the remaining flames." Nothing could be farther from the truth. We were very respectful of the concerns of neighbors and preserve users - and very controlled. In all my experience, we never burned anything outside our intended firebreak. Our consistent success happened only because we the whole team was focused and on the ball until the fire was secure. We also answered questions of passers-by so they understand the purpose and process. We never had protestors or opponents. Those political issues arose only after false charges by a Sun-Times columnist.

I was referring to when you and Bill burned at the Spring Creek Headwaters site. There were no immediate neighbors because of the site's large size and I do not remember seeing any preserve users on that day. While the headwaters site was slowly burning we went to burn an adjacent oak grove and returned later to put out the remaining flames that had slowed to a trickle in the woodlands around Headwaters.

I was attempting to contrast the differences between burning in a rural area where there were no neighbors or people compared with burning in sites that have been completely consumed by expanding metropolitanism. Increasing development is a change which you have seen occurring continuously through your career which has required more and more consideration on the part of those conducting prescribed burns.

James, now I get it. I agree. We didn't leave the site. We just let part of the burn go on without specific attention while we focused on another part. And, yes, we need to be thoughtful about neighbors. In time, if we do our work well, there should be more understanding, support, and enthusiasm for this good natural process.

Great pictures and an interesting article! It is biblical the way the fire destroys those that don't belong like the buckthorn, yet let's those who truly belong to thrive and prosper! The picture of the black haw is helpful and hopefully can use to identify in Chipily Woods/Midway Woods if it survives there! Keep me on the list of those you call/email in the future for future woodland adventures! John Cherry