Thoughts That Lie Too Deep For Tears


Thanks to the human heart by which we live,
Thanks to its tenderness, its joys, and fears,
To me the meanest flower that blows can give
Thoughts that do often lie too deep for tears.
William Wordsworth

Why do I feel this way - on early July mornings in the ancient savanna?
I have no prayer of sharing it fully with you.
But I'm eager to reveal what I can.

Truly, I'm in love with these daybreaks.
A time to take photographs - and notice successes, and needs. 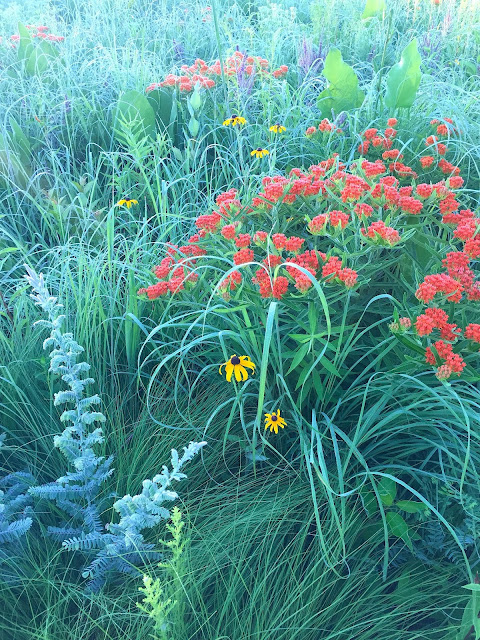 This is a world that almost didn't still exist.
We work hard to help it recover full diversity, health, and the expression of itself.

If you're interested in the names of the parts: those curling leaves are big blue stem, here sprawling under orange butterfly milkweed. The grayish foliage on the left (topped by flowerbuds for next week) is leadplant. (I'm in the moment as I look, but I'm also in the future as those buds proclaim soon purple and orange and swarming neat pollinators.) The fine grass is dropseed - royalty of prairie quality. Huge wide leaves are prairie dock - busy putting up seven-foot flower stalks. The pale green, barely starting to unfurl down in front, will later be heath aster, one of the last flowers of autumn.) 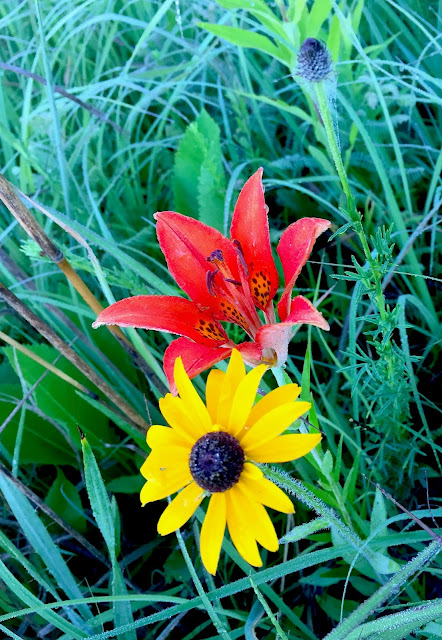 Black-eyed Susan joins the world together by living both on roadsides and in the finest savannas.
Prairie lily is so rare and conservative that we despaired of ever restoring it.
Then for a few years, with a lot of work, we saw one or two per year.
This year there were dozens, widely spread, on the way back.
Most bloomed earlier and are now fattening seeds.
But perhaps the star of this photo is purple prairie clover - fine leaves topped by a cluster of buds, on the right. This rare clover will more obviously be the star in two weeks, as you'll see below. 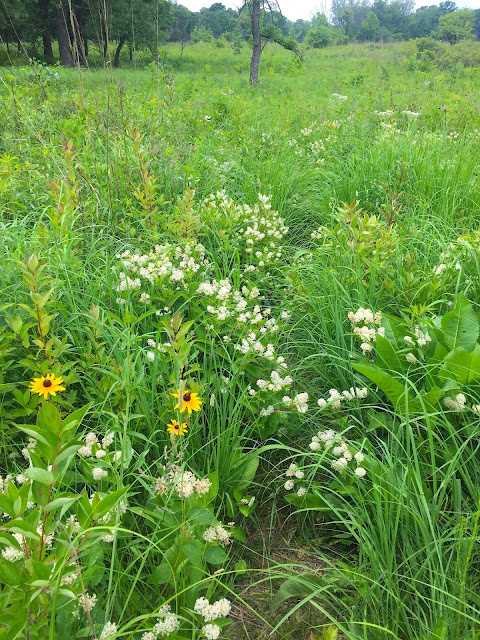 New Jersey tea. Blooming on both sides of one of our trails.

If you haven't been to Somme, this is how our trails look. You might think this path semi-invisible, but it's easy to follow - and most places aren't this overgrown. We very much need the seeds of the New Jersey tea, so we let them sprawl wherever they want, until the seeds are ripe.

Thus, when we walk these footpaths, we're in the ecosystem. We don't just see it. The ecosystem touches us as we touch it. Butterflies and beetles land on our shoulders. (We wear repellent to keep ticks and chiggers off our legs and ankles. How did the Native Americans do it?) 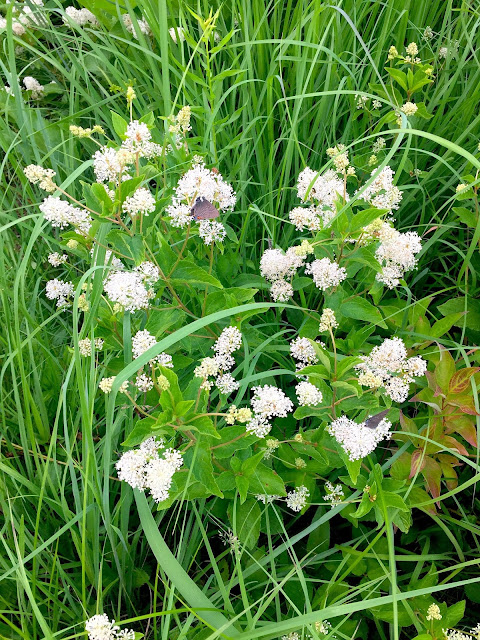 The bugs above are three hairstreak butterflies. They too are drawn to New Jersey tea. (The third hairstreak is facing us, and thus a thin gray line, if you look close.) 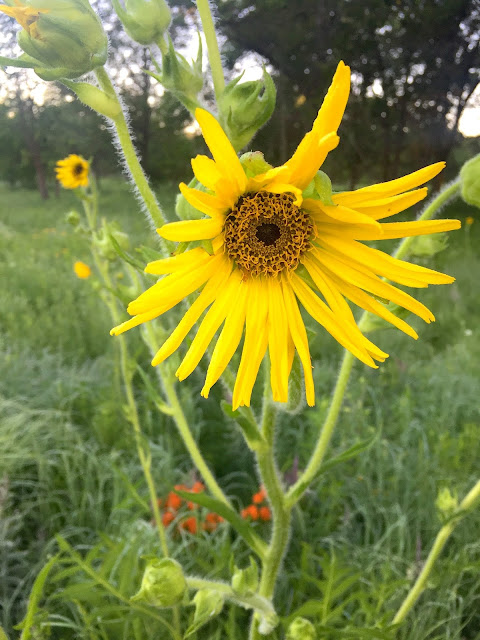 Big yellow compass-plant flower is, technically, many separate flowers. The male flowers (in the middle with the curly stamens) provide only pollen. The female flowers (yellow rays around the edge) will each make one fat seed. 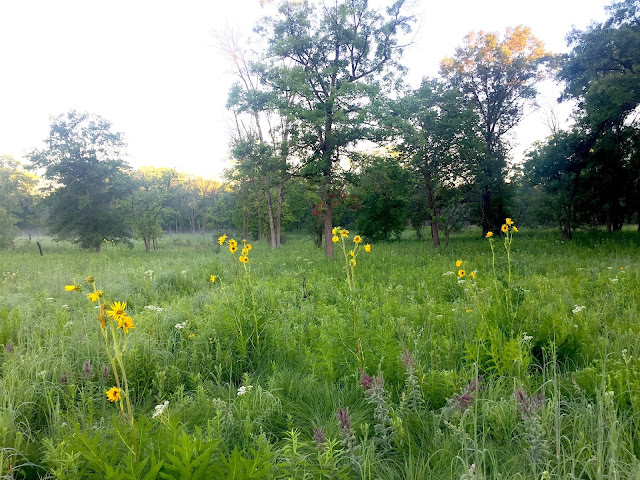 Compass-plants are taller than we are. Their roots go way deeper than the flowers are tall. Not every year do they bloom. The roots store more and more energy until the plants sense that the time is right, and then most bloom at once. 2018 seems a good year for them here. 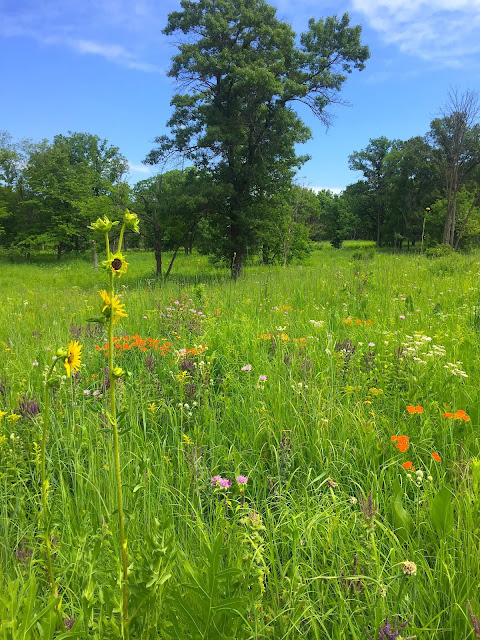 A rare photo (from a fleeting moment of misty rich light and blue sky). I walk mornings with my camera on misty days. Cloud-filtered light makes the best flower photos. So I rarely snap a patch of blue sky. I love cloudy days. Some want blue sky. This photo is for them. 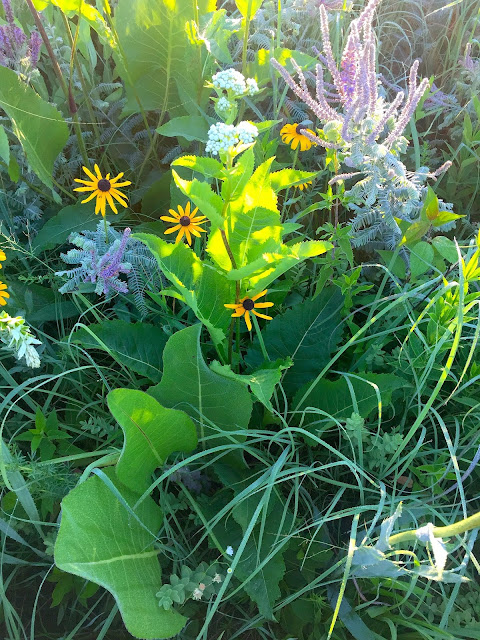 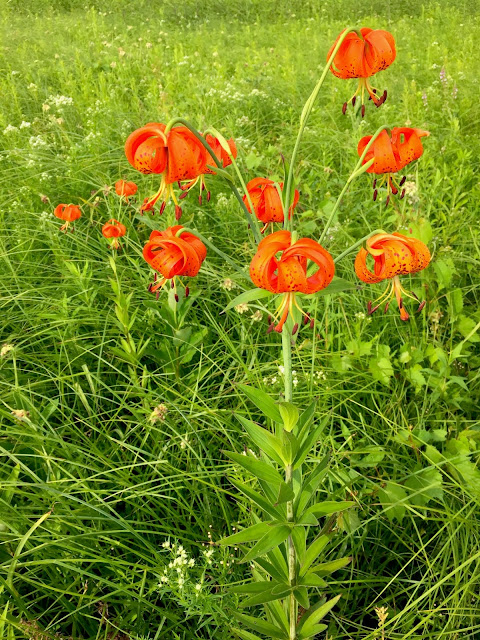 Okay, harsh light. But seemed worth documenting. Overpopulated deer eat down lilies, orchids, gentians and others until there's little left. This is Michigan lily (differs from prairie lily in that the petals are curved almost into a circle and the flowers face down). Eight big flowers represent a major blessing. This six-foot, healthy plant suggests the deer aren't so over-populated here as they once were. (Back then, no lilies bloomed. After deer control started, in the 1990s, we began to see little two-foot plants with one flower each. We welcomed them back.) 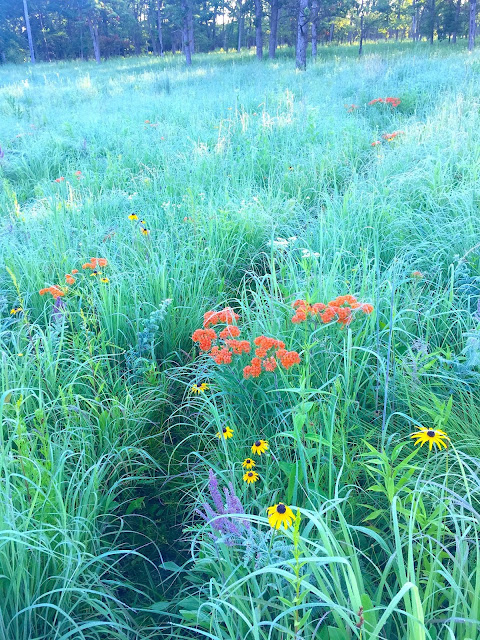 A few days later, the lead plants are now starting to put out that purple, along a dewy trail. Most of the vegetation along this trail descends from seeds we held in our hands and threw to the wind. Birds and butterflies found their ways back, as home recovered. Bless them all. 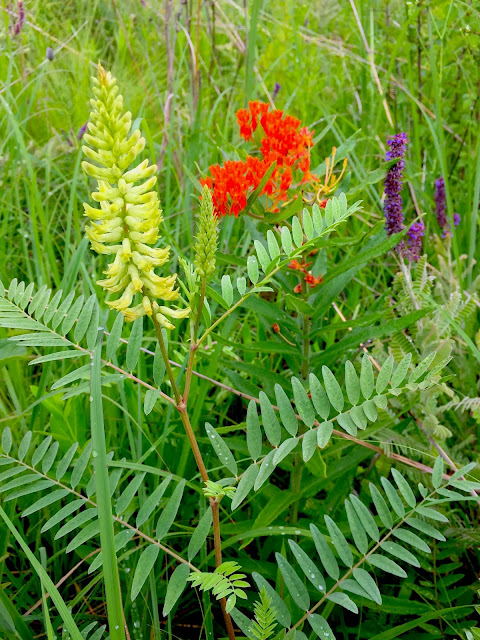 Canada milk vetch with butterfly milkweed and leadplant.
We looked far and wide to find their first seeds. Now they're common here. 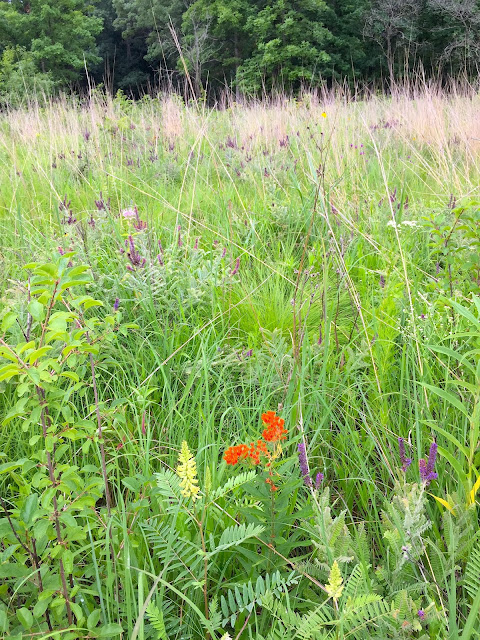 But take a couple of steps back and check out the process. Here the dry stems of last year's tall grass show that this part wasn't burned this spring. The growing buckthorn shrub on the left tells the same story. Without regular burning, every grass and wildflower here would be blotted out. Also gone would be the birds, frogs, and pollinators. We thank the Forest Preserve staff for a fine burn program. 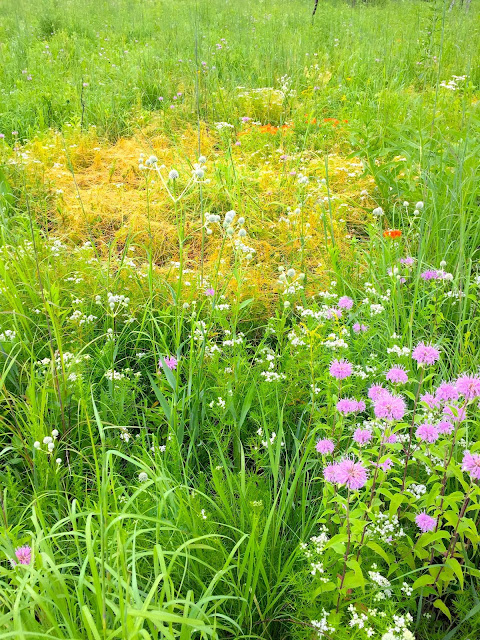 How do we feel about parasites, like the orange one above?


To me the meanest parasite that grows
May sometimes give thoughts too deep for tears?

The yellow-orange patch above is a parasitic morning glory called dodder. Where certain plants are "over-abundant" (in the opinion of the dodder), it sucks up some of their energy and makes way for more diversity. In addition to fire and animals (grazers, pollinators, predators, etc. etc.) - other "creative destruction" processes are part of the mystery and magic. 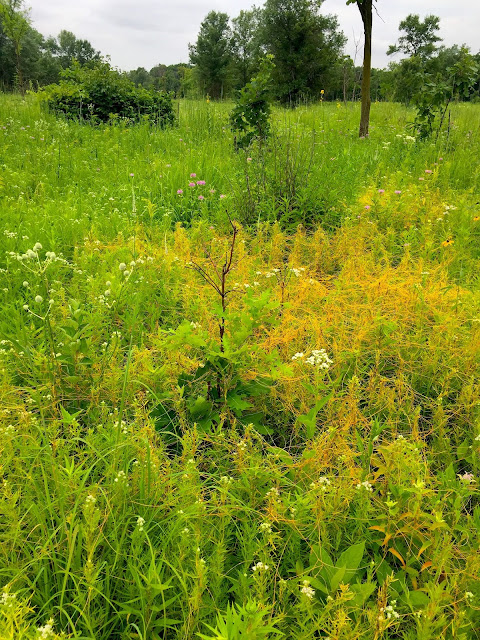 Here, closer to the trees, dodder and fire and working together and against each other. Fire burned the scarlet oak (see burned older stem and this year's vigorous re-sprout). It did not burn the little bur oak in the middle distance. Dodder will thin out the dense mountain mint and tall goldenrod. Every year what we see is increasingly diverse with rare plants and animals, competing and being symbiotic. 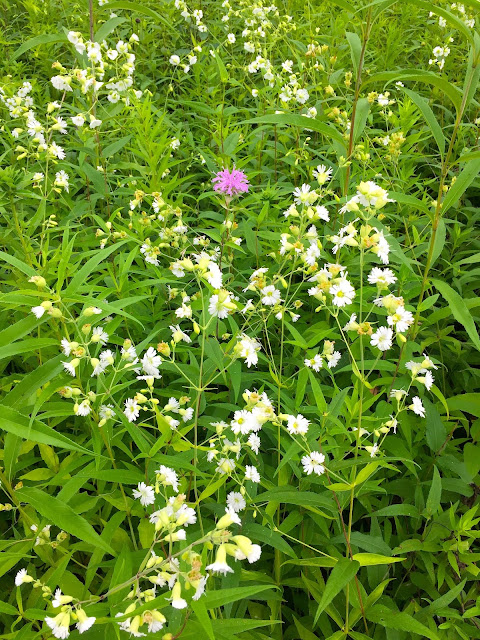 Under a large tree, a "new" species for Somme is proliferating. Starry campion vigorously competes with the somewhat "thuggish" sawtoothed and woodland sunflowers. 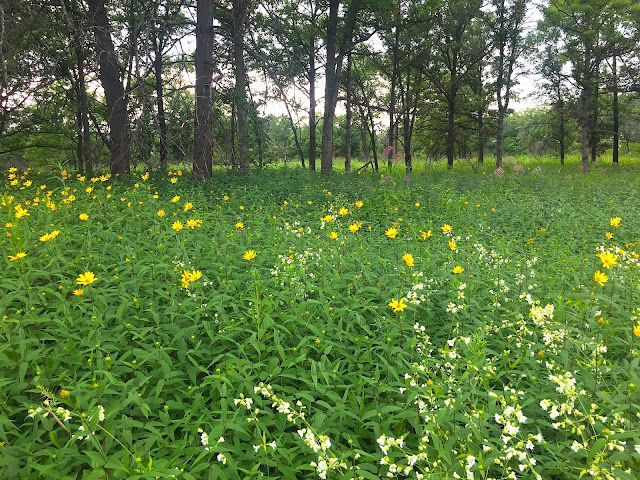 Now the woodland sunflower has started to bloom, but the (until recently, very rare) starry campion continues to give it a run for its money. Some species seem to take a while for their genetics to adjust to a new home. Then they explode. 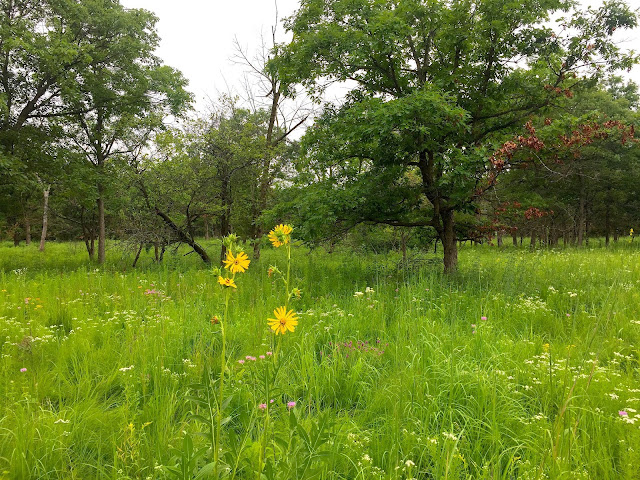 Many of the white oaks have burned lower branches (see brown leaves on right). With more sun, the compass plants, prairie clovers, and tall grasses will advance. 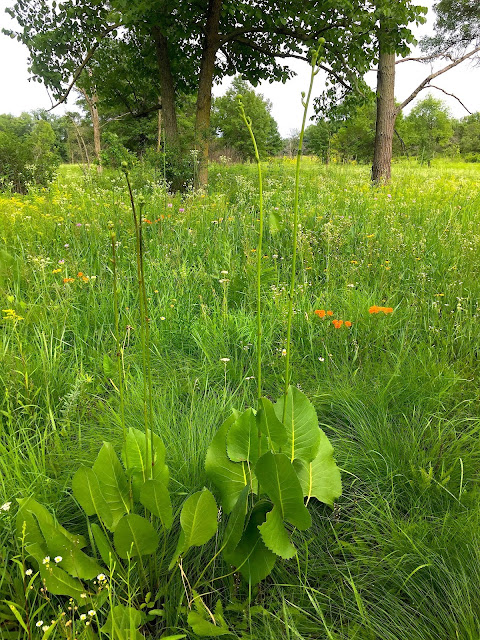 Prairie dock with its long leafless flower stalks seems to be happier among the trees than its closer relative, compass plant. Over the decades, they sort themselves out. And when a tree finally dies, the sun comes back, the plants re-sort, and it all starts over again. 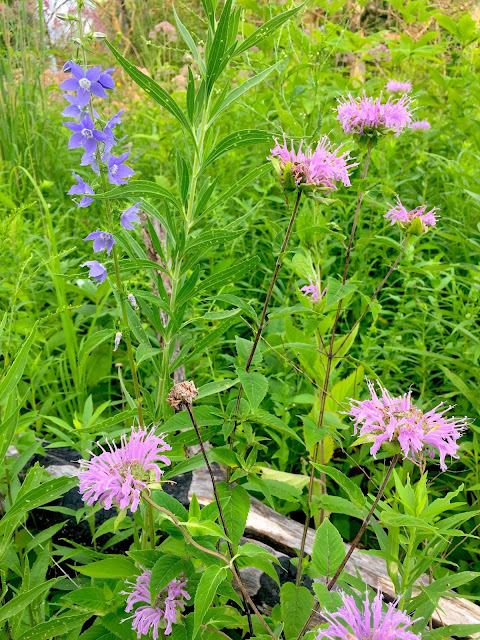 Further back under the trees, tall bellflower (blue, upper left) joins the fray. 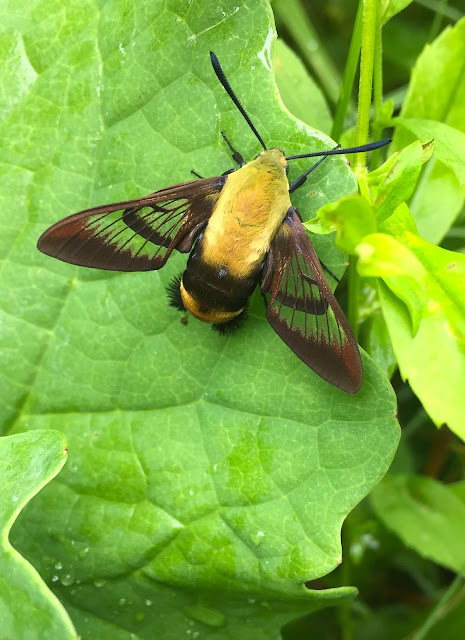 A clearwing moth. Holding still, thus the rare animal photo from me. Birds sing and pollinators flit around every shot. I care for them, am aware, feel enriched, but mostly others must take their photos for you. (I'm capable of only so much.) Thank you, to all the animal photographers. 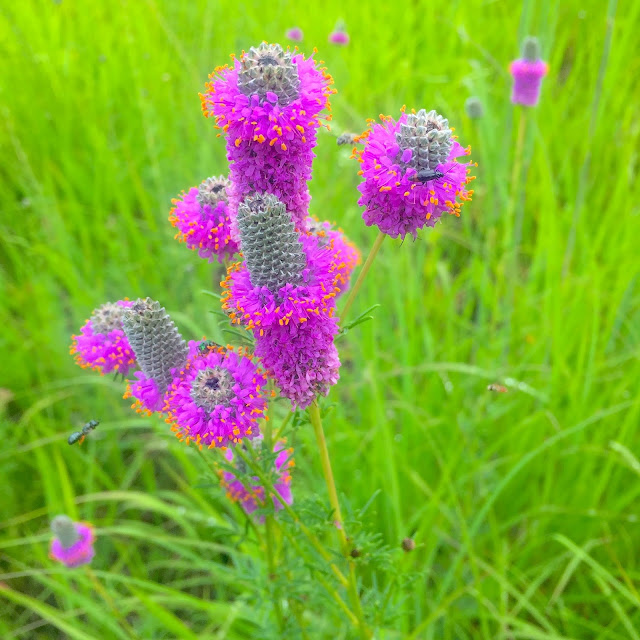 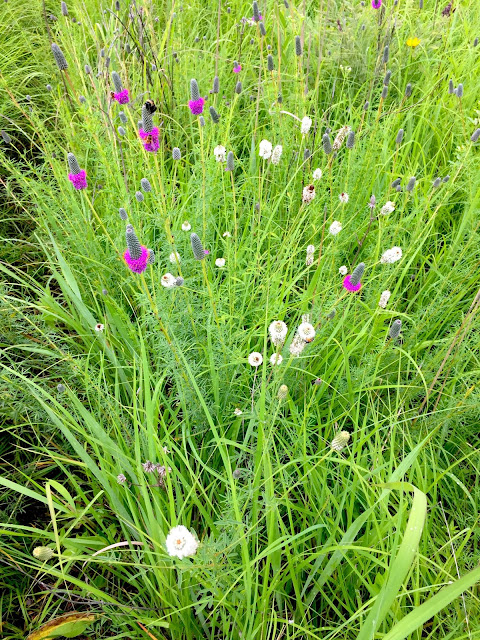 In some places, the purple is joined by the even rarer white prairie clover. The white seemed for many years like it might not adapt to Somme at all. There were just a handful of plants, in some years none found at all. We continued to look for new populations that might have more robust gene pools.

Our emotions seem like those of a parent or a doctor. The child needs to grow itself. Just so, the patient needs to heal. Our job is to care for them, not to dominate or control. 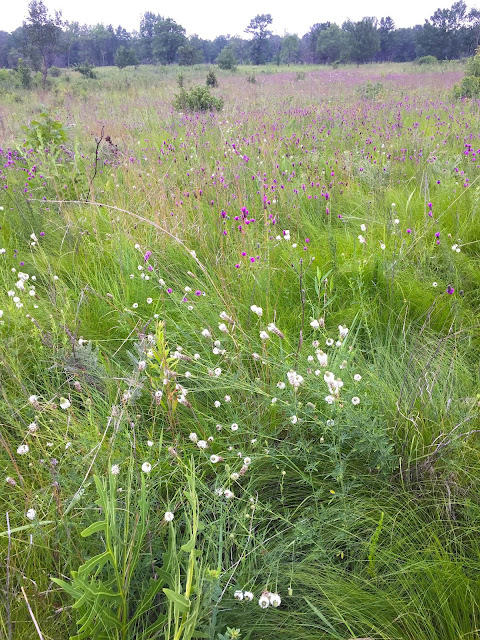 This year, for the first time, white prairie clover seems to be seriously taking off. We'd just helped it a bit over the years. Now it's taking control. 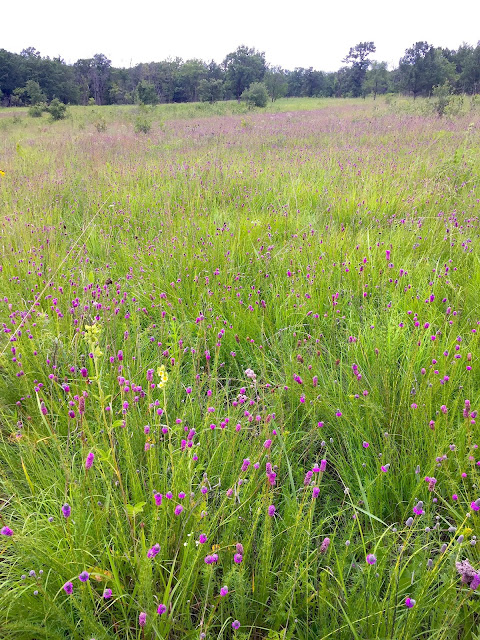 In other areas, the purple is massively alone. Also alone is another example of the drama. See that cream color lower left? 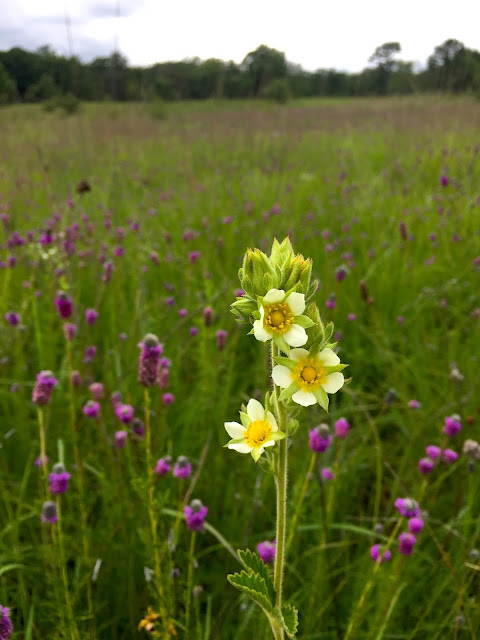 This lonely plant is prairie cinquefoil - the only one we found anywhere in the preserve this year. Some years we find none. Will this be a species that just doesn't adapt? We have found very few local plants to gather seed from over the years. Maybe the gene pool is too impoverished. Maybe we'll find better sources. Maybe this species is just slow (but after 40 years?).

Somme Prairie Grove now has 487 native plant species and many thousands of animal species. We do our best. Most of them increasingly take care of themselves. The patient recovers. The child matures. Bless them.

Thanks to hundreds of volunteers for the great restoration.

Thanks to Kathy Garness for proofing and edits.
Posted by Stephen Packard at 6:56 AM No comments:


Do you think it's too hot for you to enjoy nature - on a 90 degree day?
At daybreak, the weather is heaven.

Neither Purple Prairie Clover nor Canada Milk Vetch were at Somme Prairie when we first started caring for it. They came in with our seed mixes, from other nearby remnants.


The footpath trails may not look like much in photos, but they're easy to follow and allow you to see un-trampled vegetation everywhere else.
This same plant of Violet Wood Sorrel was shown in full bloom in the June post about this new trail. As you get to know the vegetation, it's feels good to sense past and future as part of your recognition of all these species.

The Forest Preserves of Cook County deserve mammoth credit for buying the land, empowering the stewards, and conducting the burns in recent years.

Thanks to Kathy Garness and Eriko Jokima for correcting typos and editing.


Posted by Stephen Packard at 4:42 PM No comments: