A Walk In Snowy Woods

We have different thoughts in snow.
It's a peaceful time, somehow, and we have peace thoughts.
It's also a contemplative time. Relax, have insights, make plans.

Yesterday, December 10th 2016, we had worked to improve the ecosystem's health. During the night, bonfire coals slowly burned down. Today they are still hot.
Coyote tracks are everywhere. The woods seem chill and empty, but the coyote tracks say different. They eat the white-footed mice, squirrels, and rabbits - so much more common now that the oak woodland is recovering from the excess shade.

At least two coyotes had been most everywhere we walked. Their tracks told many stories. Very often (as shown below) their separate trails came together and the second coyote walked exactly in the footprints of the first, for a while. 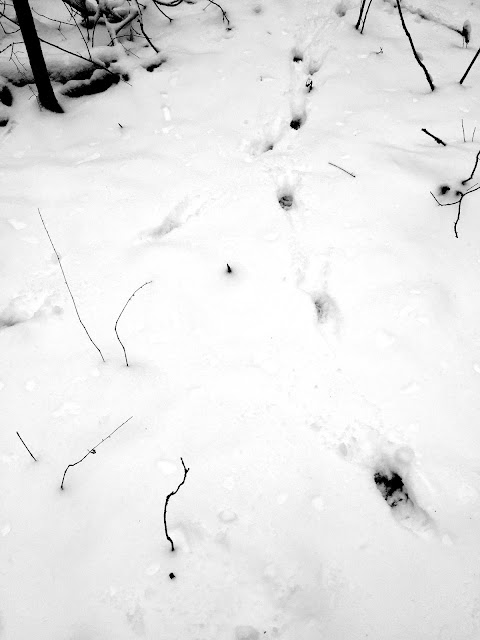 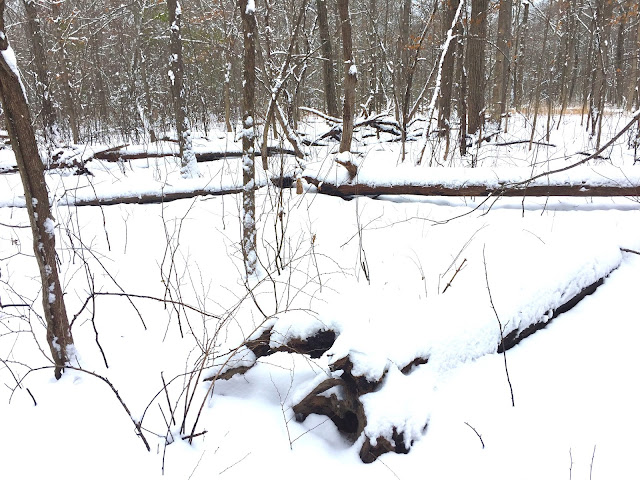 Many parts of Somme Woods have large numbers of downed logs. The coyotes like to use our trails, but their tracks often detour over to logs to check for hiding food. (We also found old brush piles, that some people would say should have been burned long ago, and other people would say should be retained for wildlife. But we saw no tracks around any of them, not rabbit, not mouse, not coyote.)

We found what looked like skunk or opossum tracks and followed them as they disappeared briefly under logs and into holes in old tree trunk. When we finally found the animal, it was indeed a possum. Whatever will it find to prey on in all this snow? 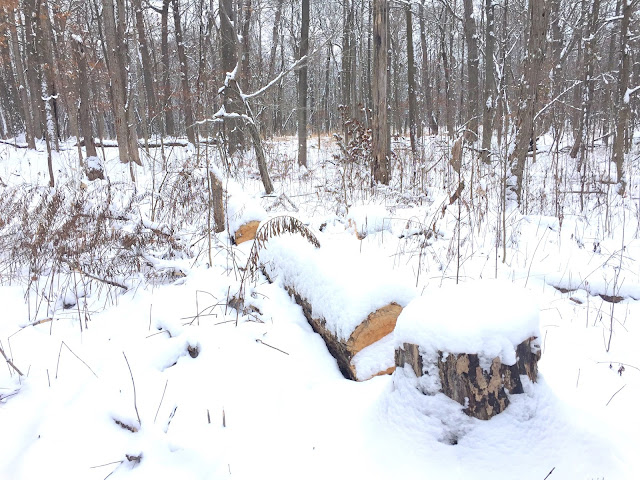 This downed and sectioned snag is a casualty of November's prescribed fire. It had been in flames, and the burn crew cut it down to put it out. (A standing burning snag is nearly impossible to extinguish.) Letting it burn would have been best, ecologically, but the spectacle was visible from a busy road, and complaints would have been a major headache. Old dead trees are good habitat and good for the woods. We try to protect them by raking around them before burns.

Downed trees catch fire also, under some conditions. Too many of them make the burns difficult; putting them out wastes time; there are too few people to get as much burning done as is good for nature. Public education should make some of these problems easier over time. 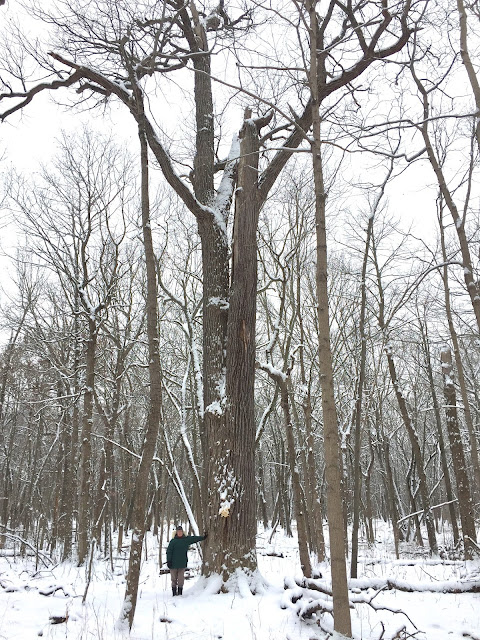 Linda Masters stopped by the Big Tree. This bur oak is probably well over 300 years old. Compared to this tree, the United States of America is a youngster. This fall, the trunk had a big "chicken of the woods" mushroom growing out of it (surviving now as a pale blob in the middle of the trunk, about a foot over Linda's head). The oak won't live forever. No young bur oaks are anywhere near by. It's been too dark for this species - the most light-lovingest tree of them all - to have had a single successful seedling in this part of the woods for (human) generations. We resolve to help it out. 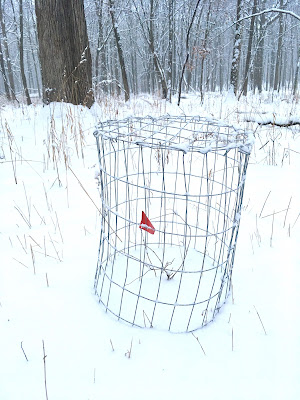 Shrubs are crucial
to many types of birds
and other wildlife.
Many shrub species
being lost from most woods.
We recently
have increased efforts
to plant, cage, and pamper
wild plum, hazel nut,
black haw, nine bark,
and others -
as we have helped out
many animal
and other plant species
that are now back
and holding their own
at Somme. 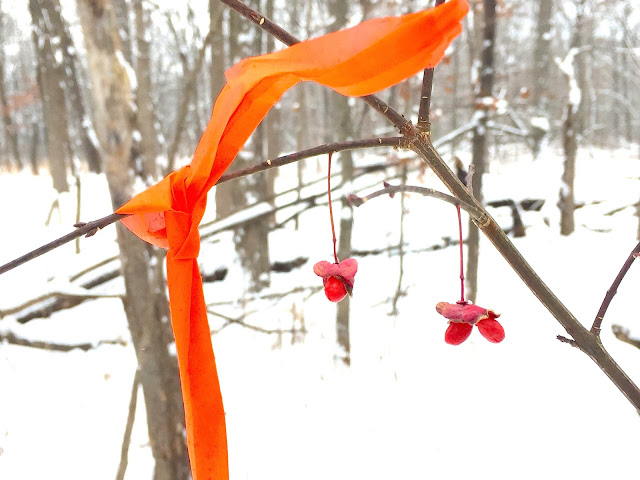 To our surprise, Travis Kaleo added wahoo shrubs to our Somme Woods plant inventory. Eriko marked these with ribbons so we could find them in the winter, to cut excessive shade away for the next growing season, to cage some from the deer if necessary, and to protect them from future fires until they have recovered a healthy population.

Snow time.
A good time for stewards of nature.
Like all times.