This is the somewhat challenging story of a workday
at which great violence and tenderness worked hand in hand. 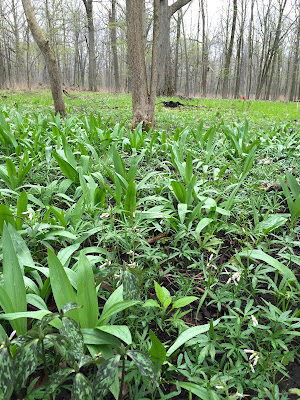 When we head out in spring,
we worry about trampling the spring flora.

Indeed, in an area like the one shown here,
that we started restoring a few years ago,
we stay on paths whenever possible.


In the foreground, as in most of Somme East before we began, the oak woods had been so degraded and shaded by invasive trees that the grasses and wildflowers were gone. Grasses and wildflowers support (and, vegetation-wise, are) most of the diversity of the woods. There are just a few species of trees. But the keystone oaks depend on a healthy open turf for reproduction, and that turf is home to hundreds of species of herbaceous plants, which then support most of the species of animals (from mice to frogs to butterflies to indigo buntings to coyotes) that make a thriving woods. In other words, in the area we were going to work - the just-dead-leaves-on-the-ground area - most of the plant and wildlife diversity is gone. Here dense buckthorn was cut years ago, but the pole trees weren't. Just cutting the buckthorn hadn't done much good. The understory was still just dead leaves.

But in the green area (in the top part of this photo) two years ago we thinned the pole trees. See the difference, above? That rich success of some of our first Somme East work inspired us throughout the day. 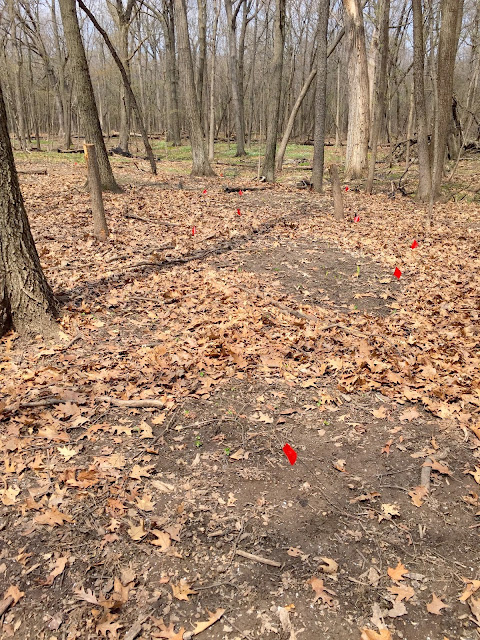 A month ago, Eriko and a few others had raked the leaves away and seeded the mix of rare and uncommon open woods seeds we had gathered last fall and summer.

If we don't cut those invasive trees, the seeds would just germinate and die of darkness. We know this. We've seen it happen.

Our raked and seeded patches were marked with red flags, so we could avoid them as much as possible.

Keep in mind that the trilliums and wood anemones (as above) are a lot harder to restore than much of the summer and fall flora in our seed mixes. We want the survivors to continue to survive and spread, with all this new light we're giving them.

Throughout the morning, we were impressed that the little flags seemed like bullet-proof protection. Yes! It was working. 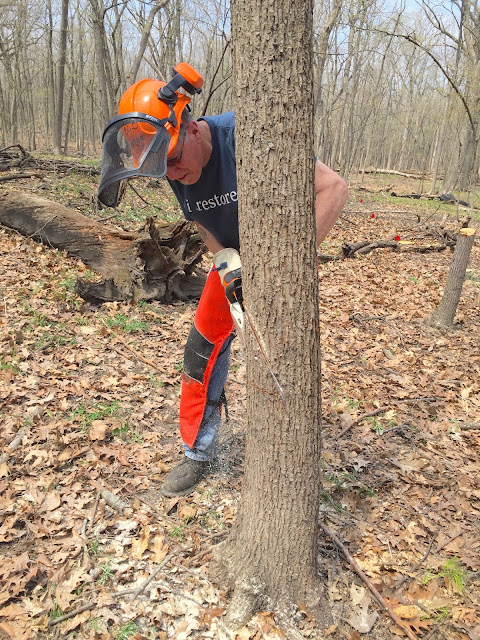 We have agonized over this quandary:

Chainsaws get so much more work done so much faster than our hand saws.

But their infernal roar wrecks our appreciation of being in nature - and makes the work more dangerous because it's harder to communicate.

Bob's electric saw solves the problem. We hope to see a lot more of it.

We wanted to compare seeds planted in the fall with seeds planted in early and late spring. For us late April is late for planting wild seed. We also wanted to compare seed that was simply broadcast with seed that was "raked in" - so the soil would shallowly cover the seeds. The map above records how we can find the three types of experimental patches here. 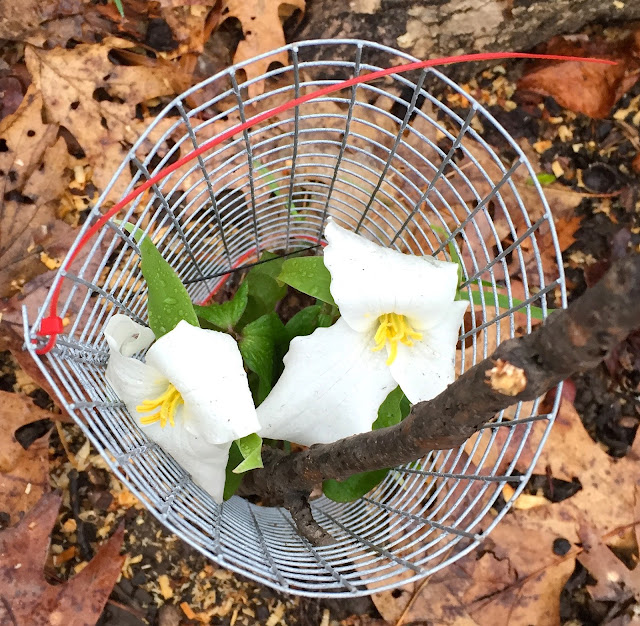 Really? Metal cage? Yet another indignity?
But the tender-hearted person removed the "intensive care ward" treatment
after trampling feet had left. 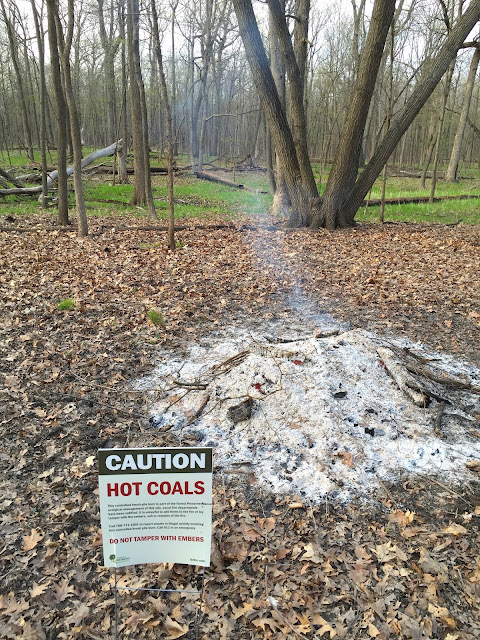 Satisfaction.
Indeed, when we checked the delicate flagged areas at the end of the day,
every patch of sacred flora seemed fine.
Miraculously.
We had celebrated.
We had worked sensitively with fire and chainsaw.
We wrought a new and wonderful kind of good.
Somme Woods is healthier and happier,
day after day, week after week, month after year. Praise be.