What a Steward Thinks about in Cold January 2013

These are some of the same photos as the previous post ...
... but with different words - more technical or detailed - if you like that.

The elm tree on the right is a good reminder of "ecological time."
We saved this tree, long ago, when we cut the dense brush that, at that time,
completely surrounded the Swale Pond (white in this photo).
We saved this elm in part because elms probably were components of the wet savannas.
(They sure have the right shape for a fire environment, no lower limbs to burn off.)
But we also saved pretty much all the big elms
because we knew they'd die anyway from Dutch elm disease,
so why not invest our clearing efforts on higher priorities?
Also, dead elms are prime habitat for the red-headed woodpecker - a species of high conservation concern.
It took 30 years for the red-heads to finally show up and nest,
but they did this year, and that felt 30-years-worth of good. 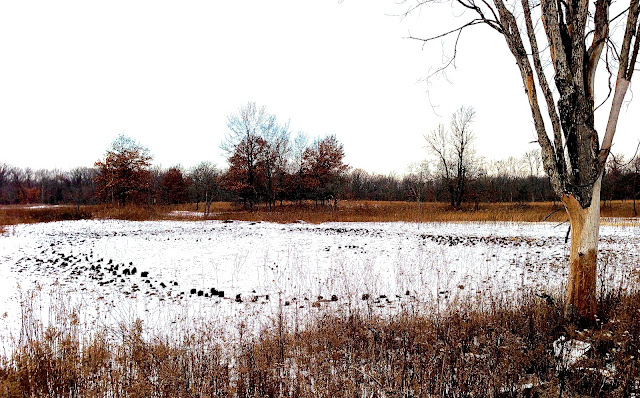 Snow on this dry pond reveals a circle of dark hummocks,
built up by ancient plants of tussock sedge.
Tom Vanderpoel is one of the few people who know how to restore this species.
He uses large plant pots (removing them after the first few years) to create the hummocks
that this formerly-common species needs to give quality to a wetland.
He has to judge just the right position in a landscape for its pattern of tussock sedges?
These are the kinds of judgments that make or break a planting as the years progress.
Thus, an experienced person with good judgment is a critical need in some specialized decisions. 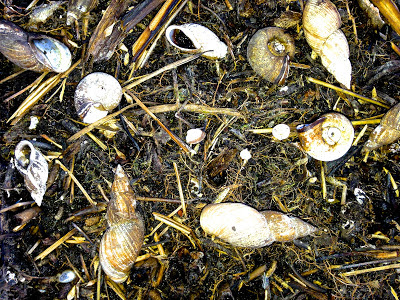 No one is studying
the Swale Pond's tiny clams
and many kinds of snails.
True restoration could restore
the full diversity of
formerly-common, now-rare animals,
just as we do for plants. But which ones require our help, and what are their habitat needs?

Would someone like to study our mollusks and help out with the many (mostly badly degraded)
ponds of Somme? 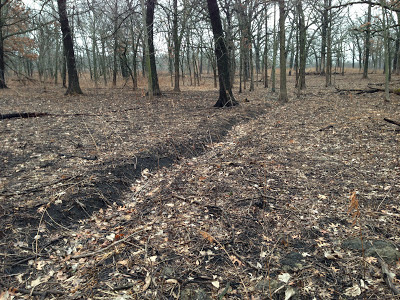 Damage to hydrologic structure is easier to see in winter. Take look at burned Vestal Grove, and notice a ditch dug by farmers long ago. We have seen how many decades it takes for restored plant species to sort themselves into quality associations. If we restore hydrology later, then they have to start all over again.  Hydrology restoration, if possible, is best done near the beginning and is long overdue here. 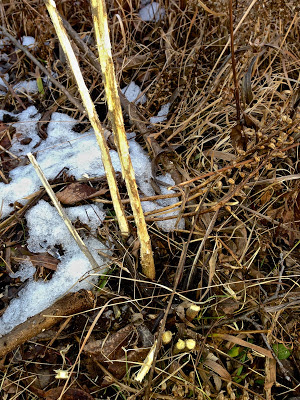 One of our biggest problems at Somme is the lack of natural tree and shrub species. Most of them (especially oaks, hazels, and plums) are especially targeted by hungry deer and rabbits. We don't begrudge these neighbors their food; indeed we wish there were a lot more of it for them to eat; and their eating is part of the function of a healthy system. But with the overabundance of buckthorn, a tipping point has been reached. It's now almost impossible for the good guys to compete. Buckthorn has an inedible bark. (Buckthorn, "Rhamnus cathartica,"  was named for the bark rather than the berries, which many species in fact relish and depend on in winter). Deer in winter eat mostly bark in the form of live twigs ("browse"). Rabbits eat bark off the bottoms of trees and shrubs, like this indigo bush. We protect the natural trees and shrubs in a variety of ways and are learning more all the time. We're always eager to find additional people who might take on a species or a sector. 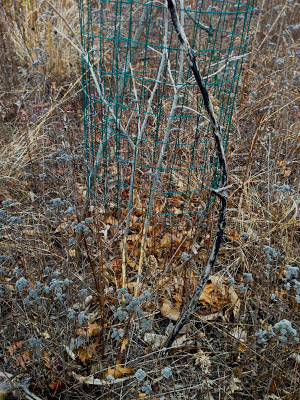 Bur oak is the most important tree of our richest savannas. (On poor-soil sites, black oak is The Tree.) All the very old trees at Somme Prairie Grove are bur oaks. Their acorns are said to be the biggest, sweetest, and most prized by animals of all the oaks. We now have hundreds of thriving young bur oaks in open areas near the old ones. But over most of the preserve bur oaks are few. So we cage them from the deer and, originally, to save on materials, we moved our short cages up as the oaks grew to protect the tops. Sadly though, as in this case, the deer cage didn't protect their bottoms from the rabbits. This problem didn't seem so bad in the past, but it's widespread this year. 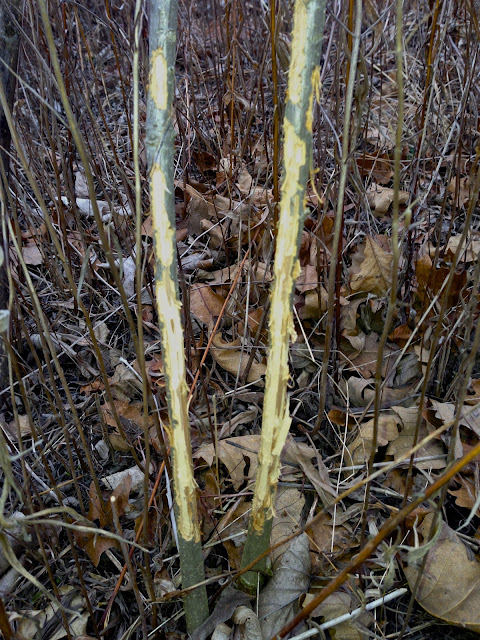 Some nibblings
just do a little damage, and the tree heals quickly the following summer. Over the years, successful trunks gradually get the thicker bark that rabbits won't bother with.


Some nibblings actually girdle a tree - which kills it.


Most typical is damage serious enough to kill the trunk, but not kill the tree. In this case trees just put up new young trunks next spring. Most mature oaks that have two or three trunks have long ago re-sprouted, following a burn or a rabbit incident in their youth. 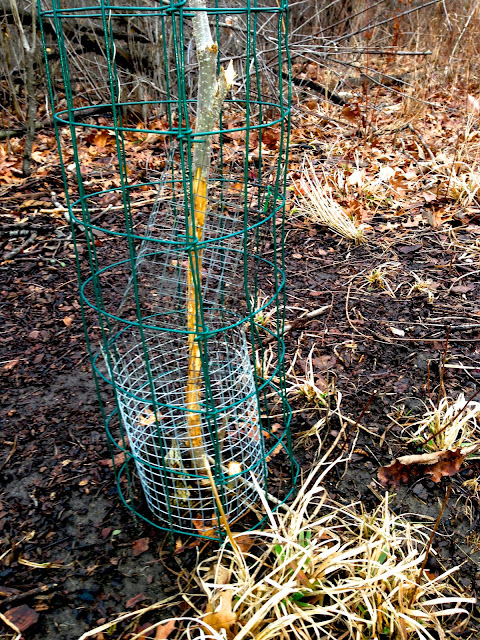 Here's an oak with added protection. We're just starting the experiments that will tell us for sure what caging needs are. The inner "hardware cloth" cages are to protect from voles and rabbits small enough to get through the wider mesh.


The photo below shows a recovering farm field with more than 100 young bur and scarlet oaks, many of which are now big enough to escape the deer and most fires. The oaks visible here by their bronzy persistent leaves are the scarlets. Bur oaks are among the first trees to drop their leaves in fall, which contribute to the hot fires that are their weapon against competing trees with thinner bark. 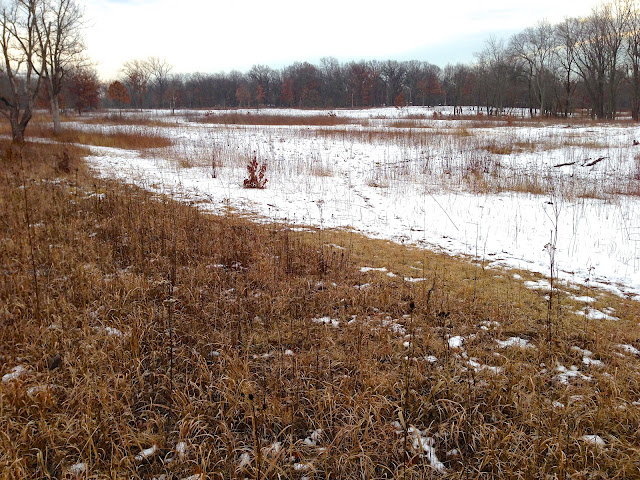 This photo also has a message on global climate change. Why a sharp line separating snow from no snow? It's the same line that divided this fall's burn (top right) from "no-burn" (bottom and left). A few inches of snow quickly melted where the standing vegetation absorbed the sun's rays and spread heat. In other areas, where the snow reflected radiation back to space, there was less melting (and less global warming).

Some people jump to the conclusion that prairie burning would add to global warming. Not so. Compared to an unburned grassland, a burned prairie grows twice as much biomass in the following year. That means it removes twice as much carbon dioxide from the atmosphere. Yes, some of that carbon goes up in smoke with the next burn, but much stays in the soil as roots and the organic matter. Thus, there's a net loss of carbon from the atmosphere.

One study showed that temperate forests contribute more to warming than do grasslands, because the tree trunks absorb solar heat all winter long while the grasslands, often covered by snow, reflect most of the sunlight back into space.

What we notice of the ecosystem in winter keeps us thinking, as we learn to be better stewards of nature, the planet, and ourselves.

Each cold walk at Somme surprises us with something new.
In winter we see the ecosystem's bones and learn about essence.

The white area burned last November. Tall orange grasses in the distance were protected by a firebreak.
The unburned pale in the foreground is a weak community of weeds, without enough fuel to carry fire.
A few years hence it will look orange and thick, like the rich grassland in the distance.

Snow where the grassy Swale Pond burned reveals a nearly complete circle of dark hummocks,
built up by ancient tussock sedge plants. In summer, I'd stumbled over them
in the lush vegetation without realizing that they were in a circle. Now the structure emerges.

All summer
the Swale Pond looked
like a field of tall grass.

But now - burned -
(and in between snows)
the bottom is strewn
with the shells of tiny clams
and many kinds of snails.

Damage to hydrologic structure is easier to see in winter as well. When we look at burned Vestal Grove, we notice a ditch dug by farmers who owned this land for the century-long gap between ancient nature and forest preserve. Why dig a ditch in the woods? Probably to improve pasture. These woods supported cows and horses then. To restore nature now, should I take my shovel to that ditch? Natural hydrology can help the ecosystem recover. 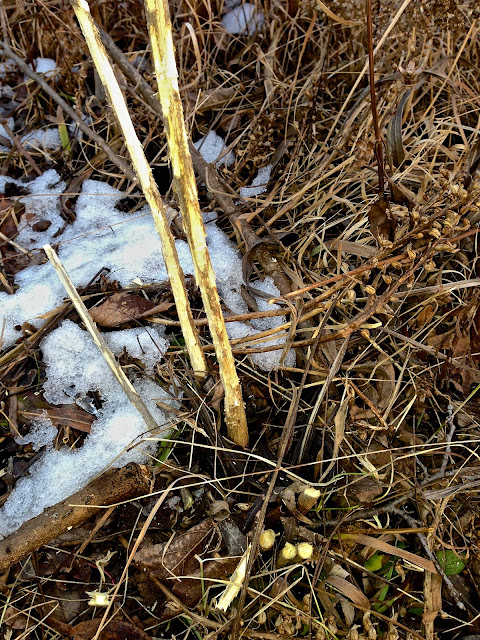 In winter, rabbits and deer eat a lot of bark. For the deer, that bark is mostly in the form of live twigs ("browse"). For rabbits, it's mostly the bottoms of trees and shrubs, like this indigo bush. Note that four stems are entirely cut off. The other two have little left. This shrub will have to start again next spring with new shoots. 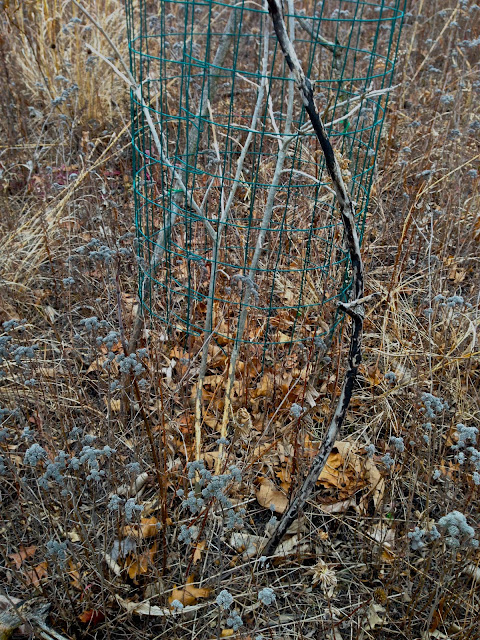 This bur oak was caged to protect it from the deer.

Most parts of the preserve have no bur oak reproduction even though bur oak was the main original tree here and over large areas.

But look down; the deer cage didn't protect this one from the rabbits.

This close-up
shows the rascals' handiwork. A trunk can recover from a little nibbling, but too much will kill it.

Here an oak has had some protection added.

The rabbits won't reach it now. 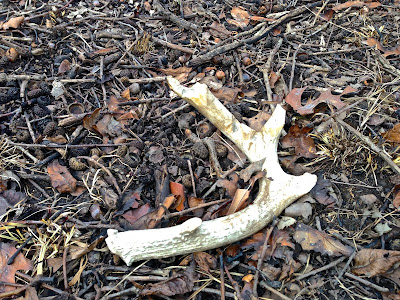 As with the clam and snail shells,
the calcium of deer antlers
survives as reminders
of the once living thing.

The same animals
that bite oak trunks have gnawed off the tips - recycling antlers
to build their own bones and teeth. Calcium supplements. 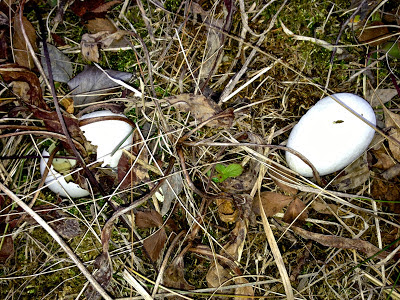 Other calcium that you might
expect to be very fragile
survives the winter.
I was surprised
to come across
these mallard egg shells,
left over from the drama
that was the subject
of "Egg Blog" (May 16, 2012).
They seem so fragile. Their insides are still lined with bits of eggy stuff. Nothing has seen fit
to destroy them
after all these months?

Why a sharp line separating snow and no snow? It's the same line that divided this fall's burn (top right) from "no-burn" (bottom and left). A few inches of snow quickly melted wherever the standing vegetation absorbed the sun's rays and spread heat. Where the snow reflected radiation back to space, less melting (and less global warming).

What we notice of the bones and essence of the ecosystem keeps us thinking. In time it helps us learn how to be good stewards of nature, the planet, and ourselves.