Twelve Animals To Save

Seventy wildlife conservationists met at the Peggy Notebaert Nature Museum on January 31, 2017 for a Chicago Wilderness campaign to save a dozen Priority Species of the region’s critical habitats. This initiative is headed by 28 agencies and organizations. Goals includes measurable improvements in numbers and habitats for all 12 species in five years and beyond.

Species were chosen for their "geographic/biological" significance. In other words, "How important is work here to the future of this species?"

This post focuses on four of the priority species that live in oak savannas and woodlands:

Of course, saving the habitats for these species, if done well, will also conserve hundreds of other species of rare animals and plants.

This large furry bee was common in our prairies and savannas but has decreased by 95% (nationwide) in recent years. It is the first bee given Endangered status by the U.S. Fish & Wildlife Service. 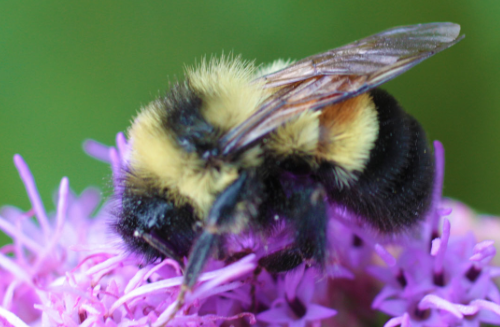 Local trends and threats are poorly known. If you (or volunteers you’re in touch with) might be willing to learn to recognize these bees, search for them, and report findings - go to Bee Spotter: https://beespotter.org/about

Allen Lawrence of the Peggy Notebaert Nature Museum explained that bumble bees are especially good pollinators of some plant species because of their impressive “buzz pollination” abilities. They unhinge their wings and buzz to shake off large amounts of pollen that lesser bees don’t get.

The big surprise here was the threat of pathogen spillover from commercial bumble bees. There has been a steady increase in the commercial rearing of bumble bees for pollination. This has not always been a blessing. Farmers are allowed to transport commercially-reared bumblebees onto their land, for pollinating crops.
This has spread diseases, with consequences for local populations of wild bees. The Xerces Society submitted a petition to the USDA requesting laws to protect wild bumble bees from disease by regulating the movement and health of commercial bumblebees. You can read more about this issue on this page and this one.

The habitat quality problem is the result of invasives, of course. If buckthorn shades out all the flowers, the bees lose the diverse food sources they depend on. Thus, “SAVE THE RUSTY PATCH” is one more good reason to restore and maintain diverse prairies and savannas.

Is there any place where politics doesn’t rear its ugly head? When the Fish & Wildlife rep at this meeting was asked if Donald Trump’s recent decree would block the agency from regulating threats to this Federal endangered species, he said, “Yes.” But that shouldn’t stop us from voluntary work to protect this species in yards and forest preserves, as Chicago Wilderness proposes. And that’s the main help this deserving bee needs anyway.

Fairly common until recently, this soft and gentle snake is recognized in Illinois as a Species in Greatest Conservation Need. It is on the Endangered list in Iowa, Indiana, and Ohio.

It has been found in 25 Chicago Wilderness locations in the past five years, but researchers have found nest failure rates ranging from 42 to 86% over the last three seasons.  Of the failed nests, 70% of failure was due to abiotic conditions like desiccation or mold. The other "~20-30% was due to predation (typically by insects) or unknown fate," according to team leader Allison Sacerdote-Velat also of Peggy Notebaert Nature Museum.  The conservation team is also concerned about unscrupulous collectors stealing snakes as pets as well as the spread of snake fungal disease. Research is under way to determine best management practices for green snake habitats. 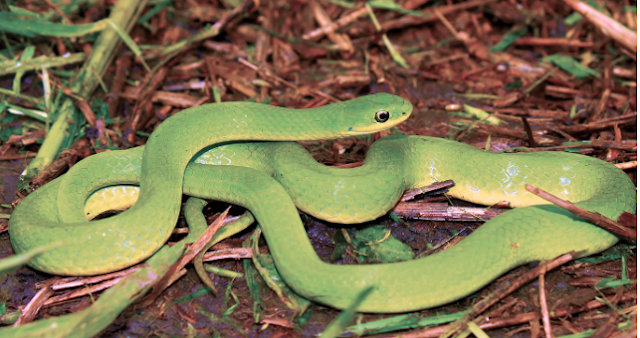 Why such a high nest failure? One possible culprit is the lack of large diameter rotting logs, which keep the eggs moist and hidden. To increase this species’ odds in the short run, three agencies (DuPage, Lake, and McHenry Forest Preserve and Conservation Districts) do what they call "head-starting." A Head Start Program for smooth green snakes consists of incubating and hatching out the eggs - either through captive breeding or through collection and protection of "wild nests or wild-sired nests" to assure that eggs don’t desiccate and die - or go down the gullets of predators. Young snakes released into good quality prairie or savanna habitat are thought to do well.

To help monitor this species, citizen-scientists are encouraged to record sightings on Herp-Mapper at: https://www.herpmapper.org.  It's important to click “mask location” so that the data can't be used by poachers. At present, the smooth green snake project doesn’t have a designated project page for this part of the effort. It is planned for the coming year. Then the information will automatically go to the research team, which may get in touch with you for follow-up.

This flashy woodpecker was also common a century ago. But it "declined by over 2% per year from 1966 to 2014, resulting in a cumulative decline of 70%," according to the North American Breeding Bird Survey. Worse. to as been declining at 5% per year in the Chicago region. That can go on only so long, if sustainable populations are to survive. The red-head is “a signature species of a singular habitat” according to John Legge of Illinois Nature Conservancy. Like a great many other plant and animal species that depend on oak woodlands and savannas, this one is threatened by habitat loss due to excess shade from invasive species, both native and non-native. According to Legge, “In my experience many people hear ‘invasives’ and only think of non-native invasives, but in oak systems invasion by sugar maples (and other species more typical of non-oak communities) due to lack of fire and other disturbance are as much of an issue.”

Legge sees this flashy woodpecker as a symbol of oak ecosystem recovery. “This is a species that responds well as oak habitats are opened up,” he said. 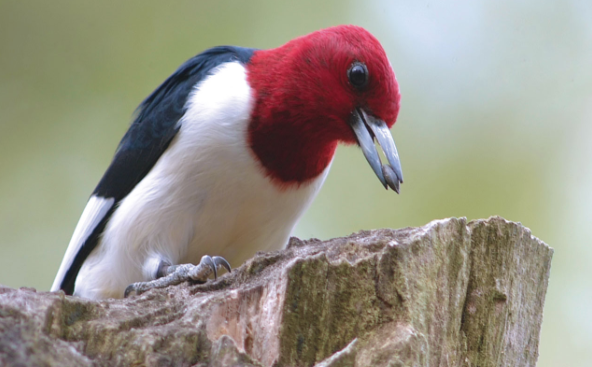 Legge recommends “a good summary of one of the more notable regional efforts to recover oak woodland habitat that would benefit this species along with many others” at: http://www.lcfpd.org/woodlands/


Many conservationists focus on publicly owned land, but Legge pointed out that 70% of oak systems in our region are on private land, so private landowners with oak habitat can potentially do a lot for the species.  A good summary of a broad regional approach is the CW Oak Ecosystem recovery plan, which is dense but has good info: https://www.dnr.illinois.gov/conservation/IWAP/Documents/Chicago%20Wilderness%20Oak%20Ecosystem%20Recovery%20Plan.pdf

The CW Priority Species page for the Red-headed Woodpecker has some fun and cute contributions to outreach on this species: http://www.chicagowilderness.org/page/redheadedwoodpecker

“These salamanders may be locally common by perception. But perception may be wrong,” said team leader John Crawford of the National Great Rivers Research and Education Center.

Salamander lovers with contaminated boots may pose another threat - the spread of disease from pond to pond. Crawford takes special care: "We follow a pretty strict disease prevention/transmission protocol (as do most researchers) when sampling multiple wetlands. After each wetland is sampled we scrub our boots, waders, etc. with a 10% bleach solution which has been scientifically shown to eliminate chytrid, ranaviruses, etc. Additionally, all sampling items (dipnets, traps, etc.) are also sterilized with the bleach solution after use." 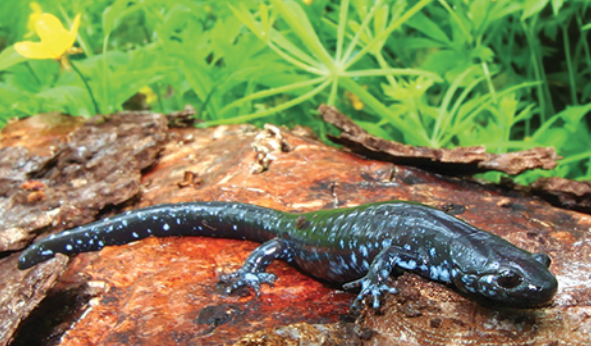 At Somme Woods in 2015, forest preserve volunteers noticed that large numbers of salamanders were dying from road salt. Forest preserve conservation staff then implemented a program that successfully protected the amphibians and the ponds from salt in 2016 and 2017. Yes, friends of nature. With a little effort, conservation works!

For more on the salamanders of Somme Woods, check out:
http://vestalgrove.blogspot.com/2015/03/dead-salamanders-why-did-this-happen.html

For more on the Priority Species program, check out: http://www.chicagowilderness.org/?page=PrioritySpecies

The eight other species and their habitats:

Thanks to Allison Sacerdote-Velat and John Legge for providing additional input for this post.