Dead Salamanders - then Salamandistas to the rescue!

For many years, herpetologist Karen Glennemeier and her daughters have monitored the blue-spotted salamanders of Somme Woods. Dark blue with light blue spots, they are handsome, inspiring, somewhat rare creatures that hike to breeding ponds in early spring. Maggie and Annie turn over logs and count them. We don't touch their delicate skins unless our hands are moist with natural, un-chlorinated water. We carefully turn back the logs so the little characters can stay moist and protected. We've never found a dead one.

Two days ago Cecil Hyns-Riddle and I started finding them shriveled and dead. Cecil is organizing a more sophisticated study of Somme Woods' many frog and salamander (and snake?) species, starting this spring. The new Somme 2030 group is taking many initiatives, and this is one. When Cecil and I first noticed a dried-up salamander in the parking lot, we felt bad for it, as an individual. But then we spotted another, and another, and on a quick walk down the pavement to her car (rushing to a next appointment) we counted 62 little cadavers.

Just a day earlier I had written to the Forest Preserve staff to express my concern about heavy salt in this sensitive area. "All this salt drains into the streams where so many listed plants are and the ponds where the blue-spotted salamanders and spring peepers breed," I wrote. It hadn't crossed my mind that salt could be a problem while it was on the pavement.

I stopped back yesterday, on another mission, and counted 25 more on a part of the pavement we hadn't walked. So we documented at least 87 deaths. Certainly there were many more; we didn't search systematically or cover the whole paved and salty area.

Salamanders are mighty survivors from the age of the dinosaurs and before. They're the only vertebrates that can grow back a severed limb. But they could smoke without inhaling; they can breathe through their skin. Their moist skin is a very sensitive organ.

At first we assumed the bodies had been flattened by cars. But why had we never seen anything like this in decades? Then we noticed that some of the little torsos weren't flat. Now CSI, we decided that the squashed ones may have been dead before flattening. We started to notice that the densest graveyards of remains were in the areas with the heaviest salt. One such area just 10 by 20 feet had 16 dead salamanders and 1 dead chorus frog.

Now we started looking more carefully out of the main stream of traffic; here many weren't flattened at all. Check out the little guy below:

In response to my email on the first 62 tragedies, I got a quick call back from Forest Preserve staff. Chief ecologist Chip O'Leary came out and bagged a lot of evidence. He was as concerned as we were. There will be an investigation. We'll report here what we learn.

FIRST UPDATE: March 19. 2:00 PM
Josh Coles and I were just at the preserve to plan this Sunday's work party. To our surprise, parallel lines of cleanliness seem to indicate that the drives and parking areas have been swept with some kind of street-sweeper. This is fast work, as the staff only got our message two days ago. The machine does seem to have swept up a lot of the salt, although some areas still have quite a bit.

SECOND UPDATE: March 20.
Tina, Bob, Cecil, and I swept up 12 quarts of salt. The more we can remove the better.

THIRD UPDATE: March 21: 11:00 AM
This morning I got a call from Cecil, crying out in a pained emergency voice, "They're scattered around the parking lot again. Many dried out and dead. Many more still alive and struggling. It's horrible!"

This morning, the volunteer crew saved 53 salamanders. For some reason there was another wave of migration last night. About 40 others were so desiccated that they didn't respond when we put them in fresh water. We left them in the pond. Some of the still ones might recover? But at least 30 were clearly dead, raising our body count to at least 110. Are the numbers trivial? Or to they add to the depth of the nearly-invisible drama?


The Forest Preserve staff arranged for the machine that did some sweeping up yesterday. But the machine broke after only a couple of passes. Now they are in the process of renting another kind of machine that should be able to finish the job. Thanks to Director of Resource Management John McCabe for the quick response.


FORTH UPDATE: March 21. 5:30 PM
Forest Preserve staffer Ron Pitelka brought heavy equipment to sweep up salt. Worked really hard for most of the day. Hard to adjust the machinery right, but in the end he got it. Looks like most of the loose salt is gone. (More details in later summary.) Thank you, Ron!

NOTE FROM RON PITELKA: March 22
The comment below was in response to a Facebook post where we Friends of Somme thanked him for his determination and hard work. It is so important that the Forest Preserves (a government agency) have people with heart, competence, and dedication like Ron Pitelka.

Ronnie Pitelka Thanks for all the kind words, Steve! I'm really glad I was able to help today, although I wish there was more I could do. I have to admit, before you showed up, the entire project seemed kinda silly and pointless, as there were no large piles of salt left, just a dusting on the whole lot that seemed insignificant. Once you showed me the dried up critters with the fine grains of salt stuck to them, it really helped me to see what needed to be done. Seeing the pictures on here and reading the blog about this project makes me really happy that I was able to get the sweeper working properly and that I spent the extra time that I did up there today. From an employee's point of view, I feel really bad that this happened. While I don't apply salt for the Forest Preserve, I have operated salt trucks in the past and I can say it's very difficult to actually see how much salt is being deposited, and simply stopping or backing up the salt truck can result in large concentrated deposits. I'm certain whoever salted the lot probably thought they were doing a great job by being so thorough with the salt knowing their work would prevent someone from falling on ice, unfortunately, it really helps illustrate the need for better communication between our departments. While individual goals need to be met, there can sometimes be unforseen and inadvertent consequences to just about any work that is done, especially when the entire picture is not always presented. Hopefully this sort of damage can be prevented in the future by simply not salting this lot, or utilizing an alternative such as sand. Despite the reason for our interaction, it was a pleasure meeting you and learning today! Thanks so much for your and all of the stewards' and volunteers' hard work!! 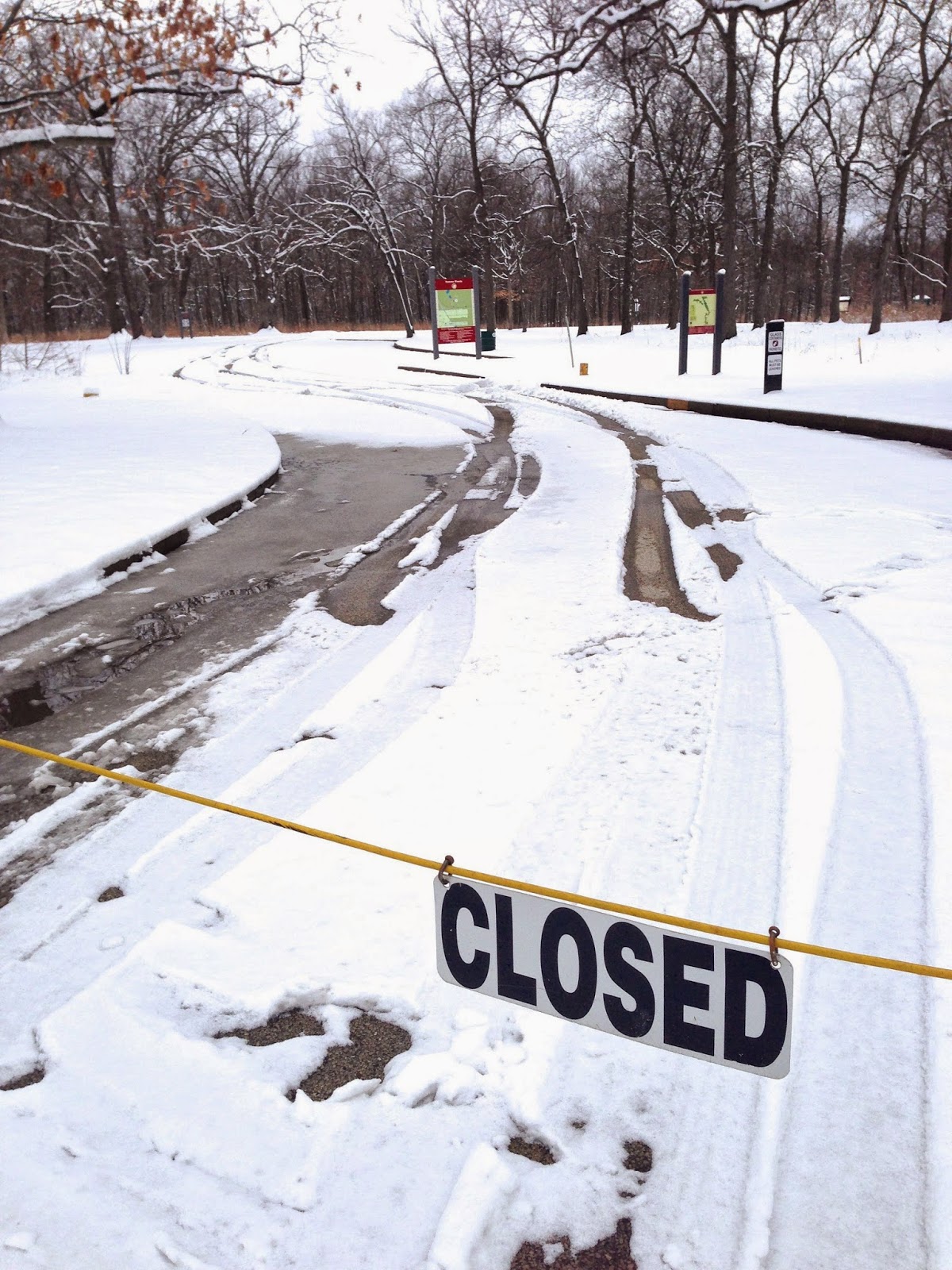 Many people have suggested flushing the caked salt off the asphalt with lots of water - and explored practical ways to do it. (Part of the problem has been that there was no significant precipitation since the heavy salt
was applied. Thus salamanders can't get past the concentrated surface salt barrier that separates their winter hibernacula from the breeding ponds.) One problem has been that the only easily-obtainable water available for the purpose is chlorinated hydrant water. Then, today, we finally got a good snowfall. John McCabe asked FP Police and Maintenance to leave the lot closed and not plow it, so the snow can dissolve the salt and wash it away. The snow is already melting and water flowing. Tomorrow we expect good rains. Perhaps this trial is behind us?

SEVENTH UPDATE
A good summary of the issues on WBEZ's "Afternoon Shift"
https://soundcloud.com/afternoonshiftwbez/over-salting-is-hurting-chicagos-wildlife

EIGHTH UPDATE: March 25th
After days of sweeping, scraping, and finally a good snow fall and melt, this blue-spotted salamander  seemed to cross the asphalt just fine. We wish it happy and productive mating season in the pond that awaits it. (The moving image doesn't seem to last very long here on the blog. There's a longer version of these classy moves at https://www.facebook.com/somme2030) 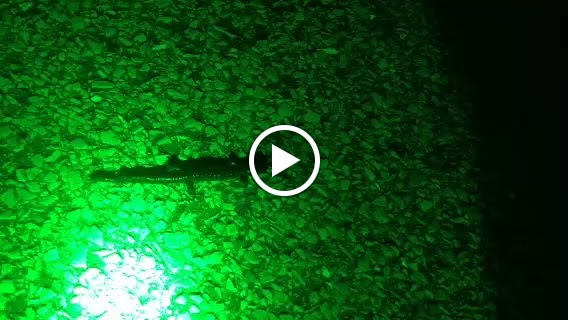