What the ecosystem is telling us in mid April: 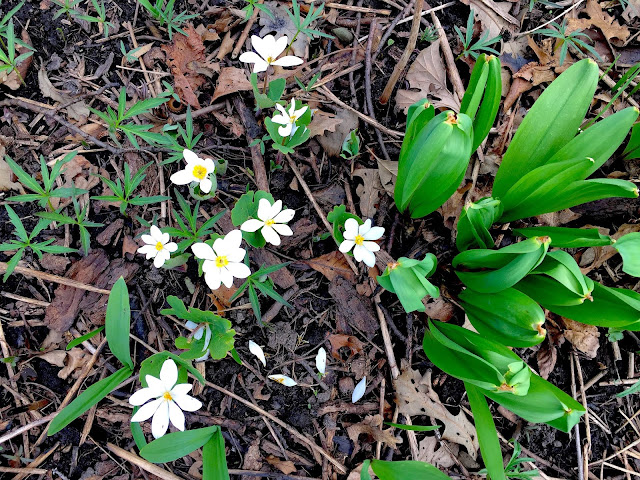 The browned, fused tips of the big leaves on the right were caused by a late spring controlled burn. Wild leeks are up very early. They sometimes suffer slightly this way. The benefits to the ecosystem outweigh the indignity to the leeks. In the middle are bloodroots in bloom, some petals already dropped. To the left are the leaves of cut-leaved toothwort, which will bloom soon. 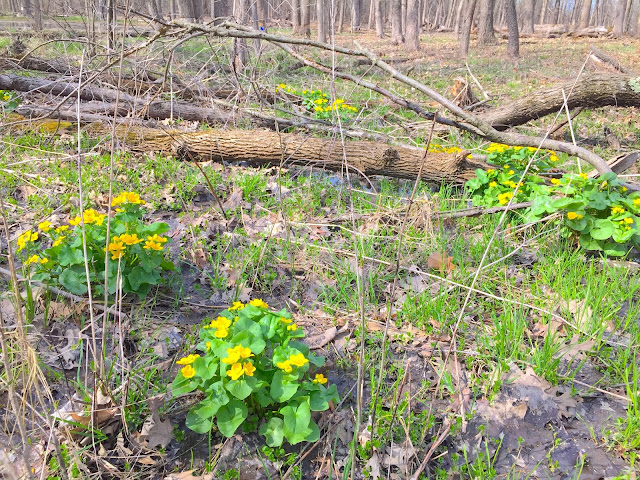 Marsh marigold is back! There were none in the Sommes when we started - likely lost while this land was a farm, or later to the shade of invasives. We gathered seed (as we did for so many other species) from a few locally rare wild populations and tossed the marsh marigold seeds into the wetlands. We counted 25 blooming marigolds along this one stream yesterday. If given a chance, biodiversity recovers. 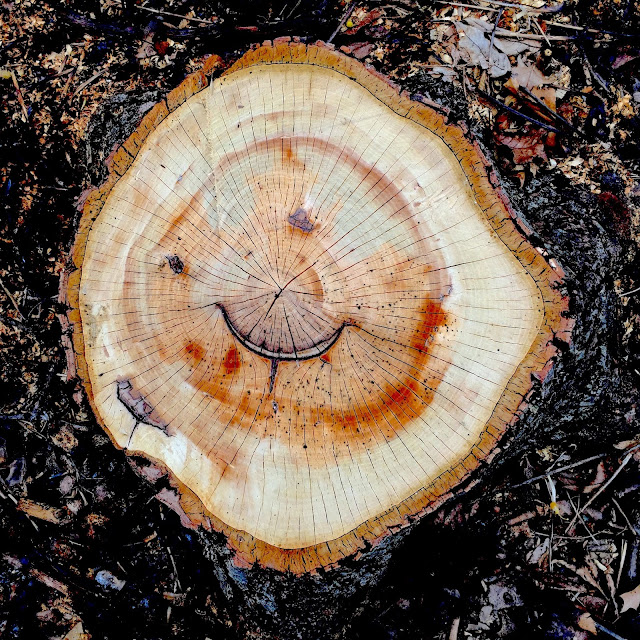 The wacky expression on this stump is also a reflection of the fires. The big "smile" is one of four burn scars, this one from 1987 - 31 years ago (count the rings, out to the edge, which is 2018, when we cut this invader down). Fires bigger and hotter than we choose to ignite today would once have polished off this invader. Today, biodiversity needs our help. 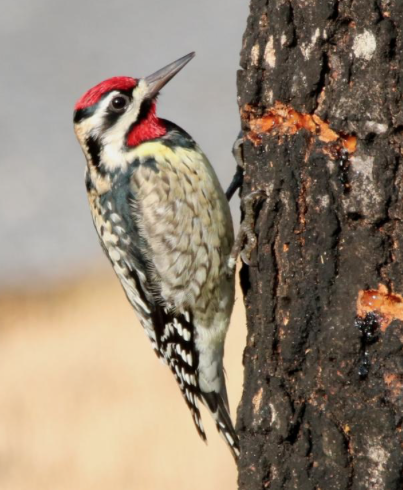 This yellow-bellied sapsucker winters in the south and breeds in the north, it passes through Somme only briefly. But it leaves behind persistent, easy to notice, lines of holes in our trees. 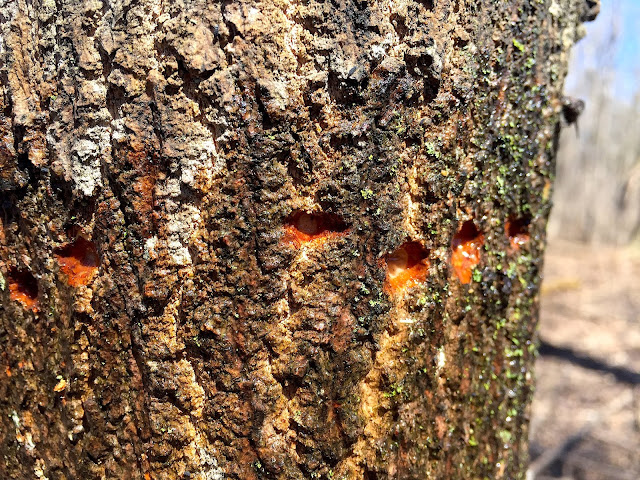 It's now especially easy to notice such holes, as they ooze dark stains of wet sap down tree trunks, especially on the maples. The sap has been attracting flutters of red admiral butterflies. 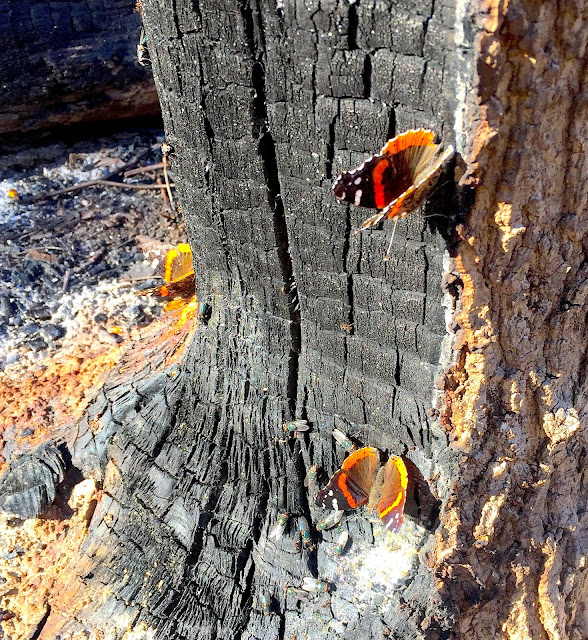 Also oozing sap are some burned trees, like this one burned by the solstice bonfire. In addition to three admirals, I count 11 flies. Some people think that butterflies are great - but flies bad. The ecosystem begs to differ. Yes, butterflies pollinate. But flies are the crucial clean up squad. With the energy these flies get from sap, they'll hunt around and find dead animals. They'll lay eggs on the corpses - that will produce maggots - that will rapidly eat up the flesh before it starts stinking up the place. Of course, flies may pollinate too, but we shouldn't short-change their other ecological services. 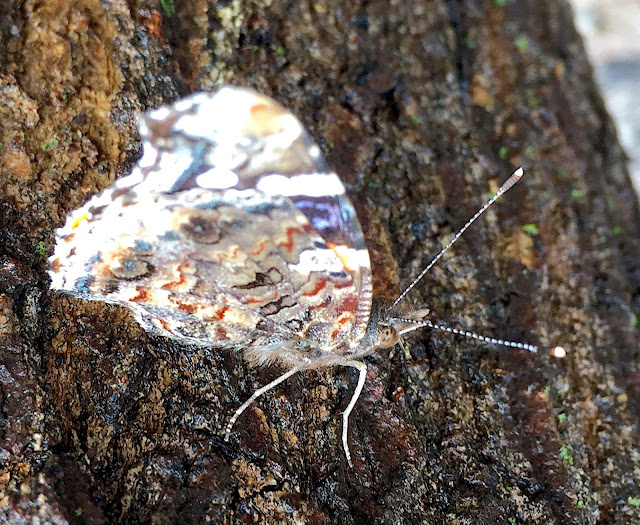 This admiral has its wings closed to show its cryptic underside. Predators, don't take notice. 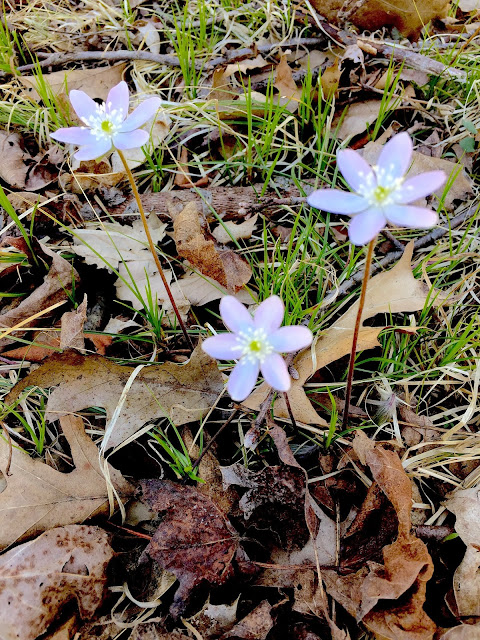 Though its photo may be half out of focus, we were so happy to find this lonely hepatica. It is a survivor. We'd seen it years ago, alongside one of the trails, but not in recent years. We now knew of hepatica in only three places in the Sommes. We regretted to think we'd lost one, even though a single plant, as it was possibly a plus to the restoration as genetically distinct from the others. Or possibly maintaining some rare fungus or bacterium with its roots. (For more on Somme hepatica, see First Flowers of Spring.) 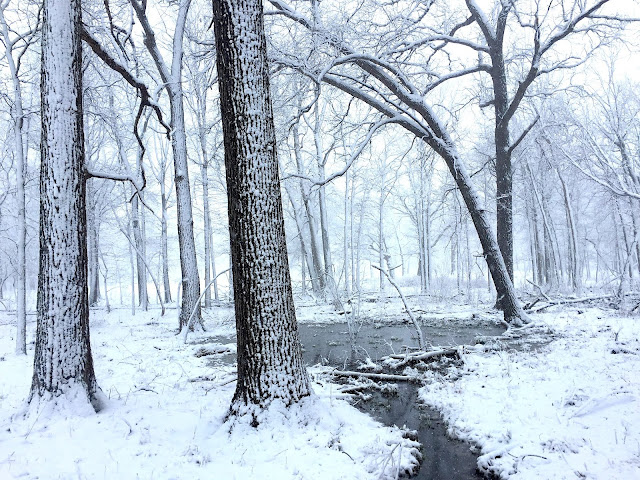 Everyone seems surprised every year that we have April snowstorms, every year. This one blanketed us on April 14 - while hepatica and bloodroot were already in bloom. As the snow melted, those same flowers emerged unscathed to greet also unscathed pollinators. 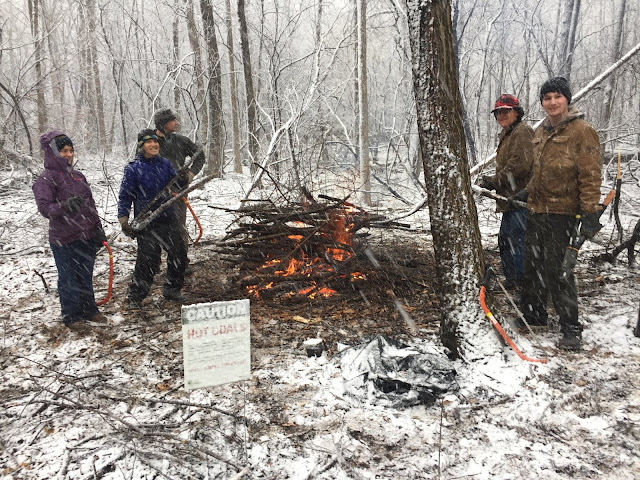 As it turned out, volunteer stewards too survived the snow. Here five of us pause for a photo before contributing more brush logs to the fire. 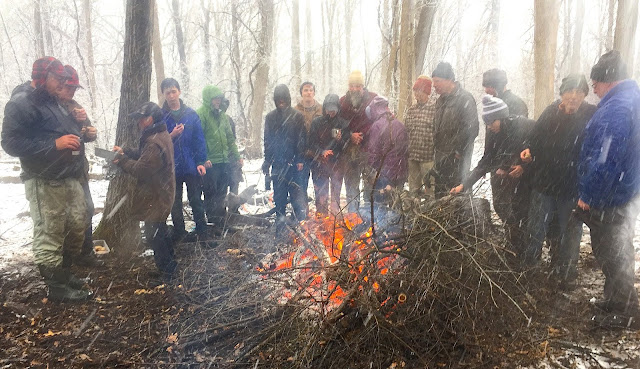 And here as snow blurs the photo, 18 of us pause for snacks and sociability. Life and restoration have these dramas. 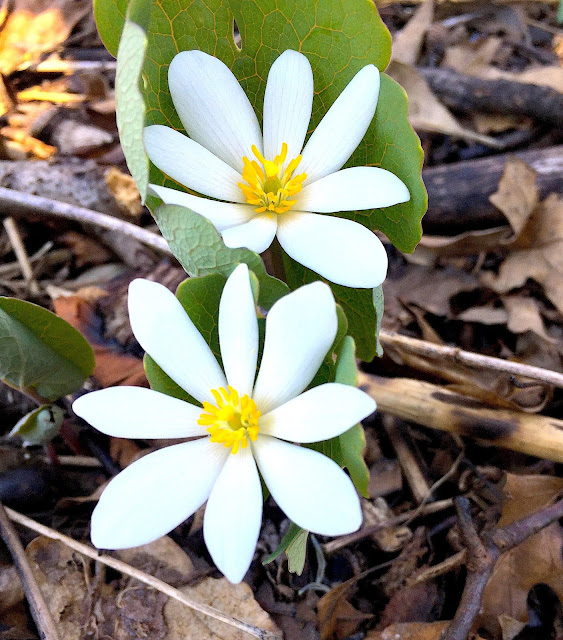 As the season advances, bloodroot leaves expand and rise and fold themselves around the flowers as if protectively. I suspect they do protect. I wonder from what. 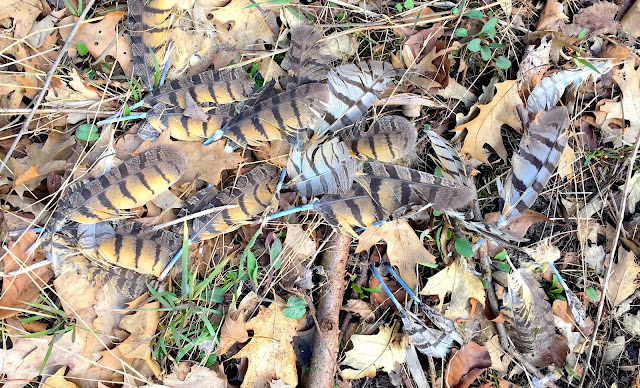 Almost invisible on the gorgeous forest floor are owl feathers. They color themselves like foxes, coyotes, chipmunks, deer, hermit thrushes, fox sparrows, and so many species that want to blend in. 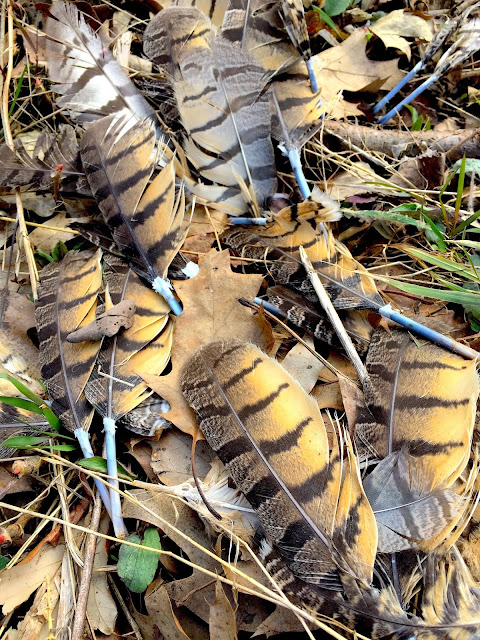 Survival of the fit. Rob merely glanced at this photo before exclaiming, "in blood." Turns out that's a falconers' term for feathers just erupting. See those long white bases? Out of those, the feathers emerge. That fact suggests this was a mostly-grown owl chick. Perhaps eaten by a red-tailed hawk or a coyote. (Adults replace feathers a few at a time. The feathers would not be all just emerging if from a healthy adult.) A large portion of the young of most birds and mammals don't make it. Youth is hard. But a deep and quiet beauty remains.

Rob is a falconer, blues musician, plant propagator, environmental regulator. He knows so much that I don’t.  Yet I know stuff that he doesn’t. We put our heads together. What is unknown by us may be known by our volunteer colleagues Linda Masters, or Sai Ramakrishna, or Eriko Kojima, or both of our Matts, or Stephanie Place. We end up being richer as a team and community. 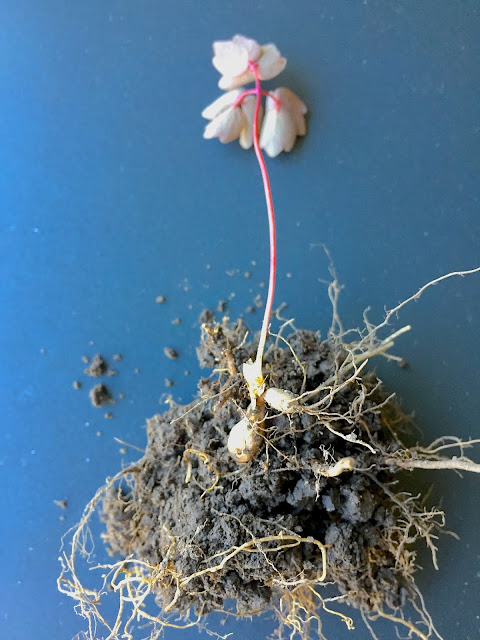 Back in our seed production beds we've been agonizing over rue anemone. We get few seeds. Those we get don't so far seem to produce plants when broadcast into the wild. In savanna and open woodland restoration, rue anemone is deeply desirable - a high conservative associate that promotes sustainability among diverse species. It reproduces well enough in our best weeded, seed production beds of diverse conservatives, but we have only so much time for weeding - and rank competition shades it out. On the other hand, now we're finding rue seedlings emerging in our adjacent ill-kept lawns. We dug some up (see above and below). To make sure what we're dealing with, we Very Carefully pulled the other plants away until we could see the roots. Yes, they're just under the surface. Easy to dig. (The "lawn" is full of violets, veronica, dandelion seedlings, moss, etc.) Both plants revealed two little potato-like roots. (Note: do not dig up plants from wild places that you don't own.) 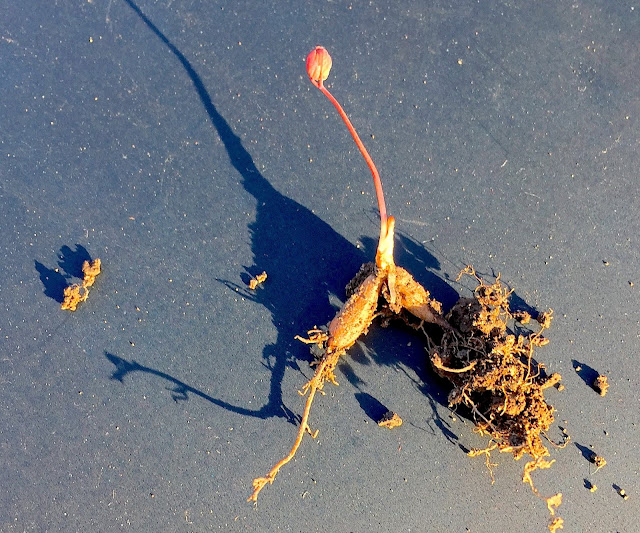 We will nurture these in pots until they get bigger and then put them out into the ecosystem, some late fall or early spring, while still dormant. In the past we did that with plants rescued from wooded home-construction areas. For two decades we saw little reproduction. But now, forty years later, some of those individuals are surrounded by patches of thirty or forty younger plants. Perhaps that's the way to restore them. Perhaps they need to spread slowly to take along with them interdependent fungi or bacteria or nematodes or whatever. 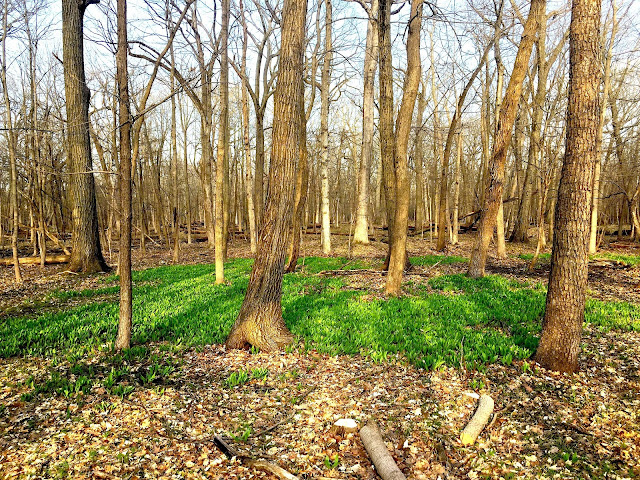 This leek patch, similarly, has been getting larger, and denser. Leeks shrivel into the duff as soon as the tree foliage gets dense, using resources from the leaves to replenish the roots for next spring. Here among red and white oaks, where we've been thinning invasives (see the remains of pole maples lying by their stumps in the foreground), more diverse summer and fall flora will emerge from our broadcast seed mixes. The leeks will be less monocultural - part of a more resilient ecosystem. (And the leeks, unlike the rue anemones, though initially few, turn out to spread well throughout the preserve by the seed we broadcast.) 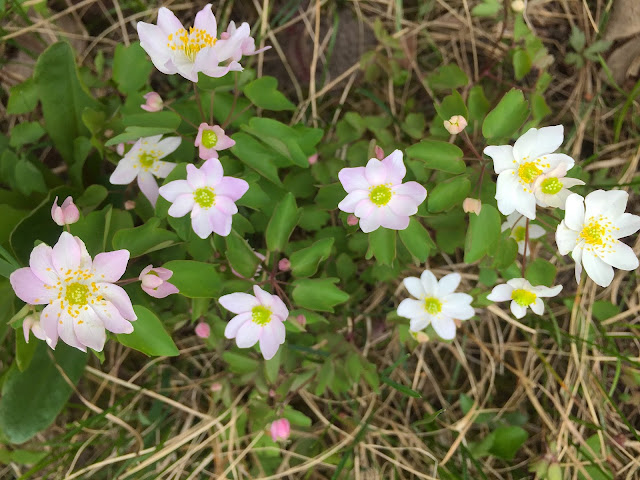 Back to rue anemone, it appears delicate but is a rugged, long-lived building block toward quality biodiversity.

Here's how an old rue anemone seed-garden planting looks after a lot of weeding: 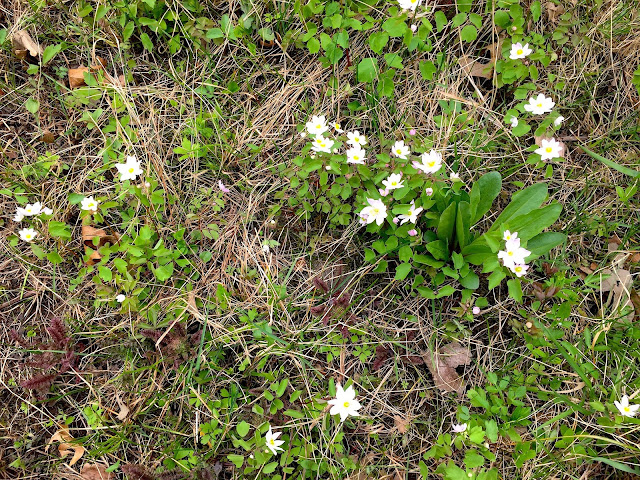 Before taking this photo, we painstakingly plucked the leaves of lovely and sometimes rare plants that we don't need - for the benefit the species we do need. Above we are favoring: rue anemone, shooting star, meadow parsnip (Thaspium), violet wood sorrel, and dog violet. (For now, we’re not weeding wood betony, Pennsylvania sedge, and cream gentian - though we don’t so much need seed of those species, but more view them as effective companions for what we do need.

If you zoom in on this photo and look closely, you'll notice that there are still some of those five-part wood anemone leaves that need to be weeded out. As yo notice them, perhaps you'll feel an itch to weed, like us restoration gardeners. 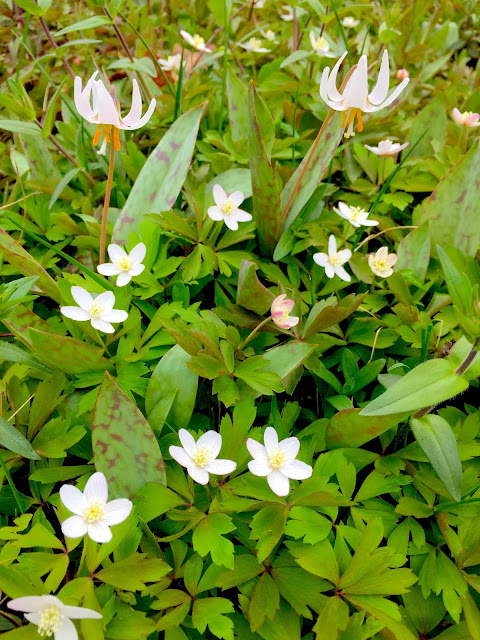 The mottled leaves and reflexed-petals flowers with yellow stamens are trout lily. The five-petaled yellow-centered flowers with five-part leaves are wood anemone. The purple stems with paired leaves (starting to rise over the rest to turn this whole patch baby blue with blooms in a couple of weeks) are woodland phlox. This little garden ecosystem has beauty after decades, but the dense wood anemone seems to prevent the reproduction of fire pink, rue anemone, yellow wood violet, and other seed we need more. We keep this mix for now as a pretty pet, until we have time to help this bed contribute more. 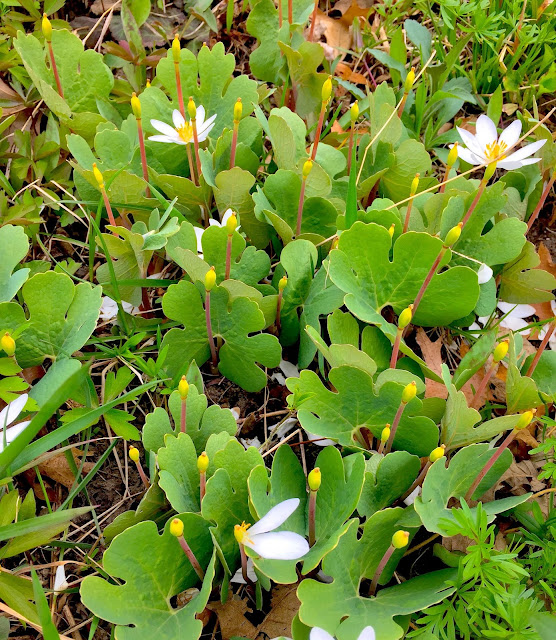 Last photo of this post: Bloodroot petals that braved snow are now proudly falling to make way for seed capsules that will be erect, long, and thicker than the fattest green beans. By then they'll be difficult to see, down under the expanding leaves. We'll harvest and broadcast bloodroot seed in Somme, where there was none but has been proliferating mightily. Onward! and Upward! noble ecosystem recovery!

Acknowledgements:
Sapsucker photo thanks to Outdoor Alabama.
Thanks to Kathy Garness for proofing and edits.
Posted by Stephen Packard at 12:33 PM 2 comments:

First Flowers of Spring (be still, my heart)

White, purple, pink, and every color in between – hepaticas have just popped out of dead leaves, our first wildflower at the Somme preserves. They pose some questions. 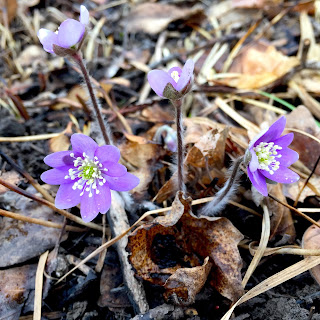 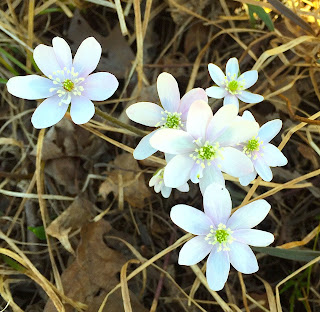 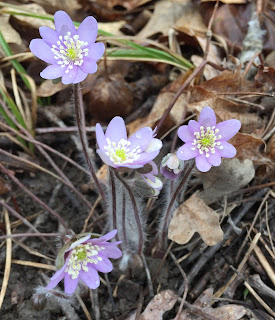 How do we restore them, for example?

Records suggest that they were common and widespread in the oak woods. These days, few woods in this area have many - or any. At Somme, for years, I knew of only two individual plants, now both gone. What happened to them? Then, unexpectedly we found a patch of thirty, and we vowed to protect and restore them widely.

We wondered if it would help the plants if we were to rake off a lot of those smothering last-year's dead leaves. 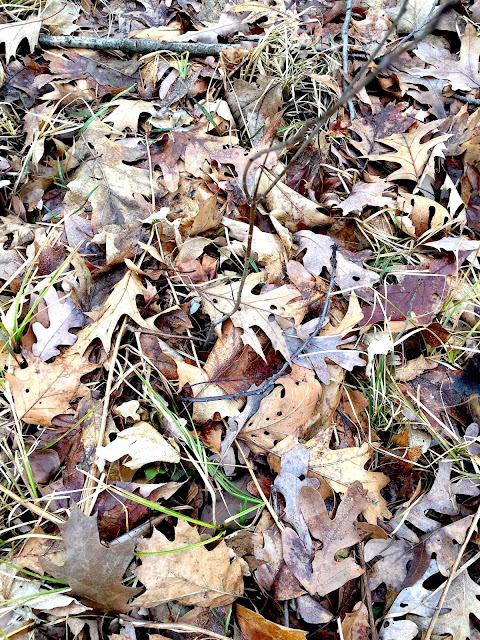 For example, here. Why this photo? It's the "before." We only suspected that there were live hepatica leaves under this litter because we remembered where they grew. Notice that gray stick on top for reference in the next photo. 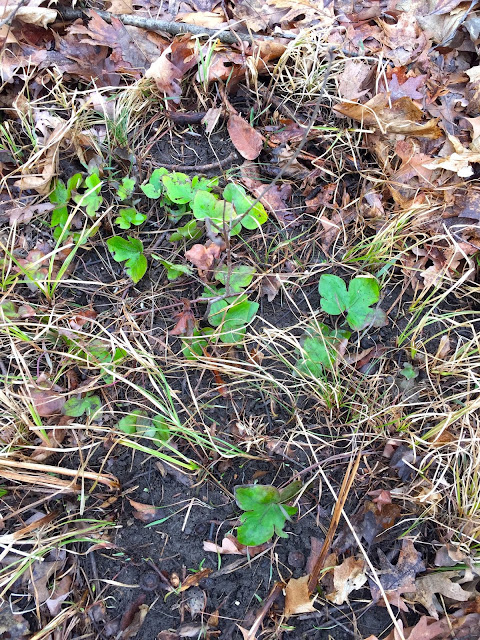 These emerald gems are the hepatica leaves. They photosynthesized through spring and summer of 2018 and then settled down for a winter under autumn's fallen leaf blanket. Why do that? Most perennial plants transport what they can from their leaves back to their roots for storage (and energy) over the winter. Pine trees keep their leaves and photosynthesize all winter. But hepatica keeps green leaves where the sun can't get at them. What gives? 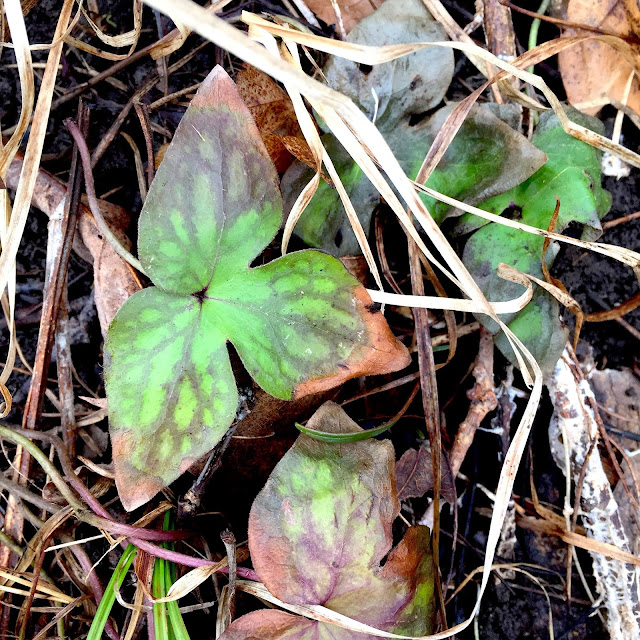 Here's a leaf close up. Some are all green, and some have purplish patterns.

(Trivially, hepatica leaves are shaped like human livers. The name "hepatica" comes from a word for liver, just as "hepatitis" means "disease of the liver." Long ago ignorant herbalists thought that God placed "signatures" in plants so we could figure out what diseases they cure. This leaf was prescribed for liver disease. The herbalists who sold it claimed it worked. It didn't.)

Hepatica are delicate plants. They grow slowly. We have broadcast seed around now for a few years and as yet seen no results. We have hoped, but not expected. Tom Vanderpoel said that in his experience, "hepatica do come from seed – but few – and slowly." Rob Sulski has raised some in pots for us. After a year, they're so small. It takes time. 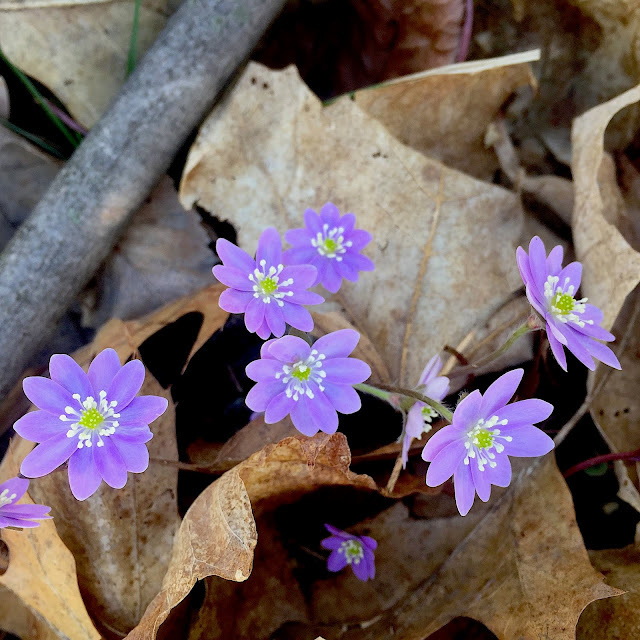 Whatever their secrets and science, we love them. Our first flowers of spring. So sweet and good. Bless.

PS:
A "more technically interesting and detailed" version of this post is at Strategies For Stewards.

PPS:
All photos above were taken with a handy cell phone in the last fine week of long-awaited spring.

Thanks to Kathy Garness for proofing and edits.
Posted by Stephen Packard at 1:29 PM 2 comments: