Can two acres of rare prairie ecosystem become seventy acres? Can hundreds of vulnerable species - that have been hovering on the edge of oblivion - recover a robust and sustainable future?

If so, how? Who is planning and doing it? This is a follow up to an earlier attempt to clarify what now - to many - has looked like a shameful mess. Back in December, this blog tried to answer some basic questions.

This post brings us up to date and provides maps and additional details. Let's start with answers from the Forest Preserve's project manager Troy Showerman to some Northbrook residents' questions.

Q.
Do you expect all the trees to be removed this winter? What if the ground isn't frozen?

A.
I am still hopeful they will complete the project this winter. The machinery and moving the heavy logs makes it hard to work without completely tearing up the ground, which is why it has been sitting for a while with our warm winter temps. I am pushing them to get out there next week to take advantage of low temps and some snow cover. It is more than a week of work that is left, so we'll still need favorable conditions.

Q.
What’s the total cost of the whole project?

The entire grant project is approximately $150,000, half of which is being paid for by the U. S. Fish & Wildlife Service. That includes the brush removal completed last winter, tree removal this winter, two years of follow up on resprouts, and the planned seed collection for this coming growing season.

Q.
How much does the contractor recoup by selling logs, chips, or whatever?

A.
Based on how hard it is for us to get rid of woodchips, not much. The majority of the logs are collected by another company for free, and they turn them into wood pallets. The contractor doing the work will take some of the better logs to sell as firewood. The biggest cost with any tree or brush cutting project is tied up in disposing of the material. We consider it a plus if any of the wood can be reused as a by-product, even if it is just firewood and pallets. As a counterpoint, the invasive trees cut by some of our contractors are just ending up being burned on site.

Q.
Does the Fish and Wildlife grant cover the whole cost of the Somme Prairie restoration? Does your grant proposal give figures for the value of what the FPD staff contributes? and/or the volunteers?

A.
Partially answered above, but we did not include staff or volunteers as part of our match, just cash. We did include the volunteer history and commitment to the site in our grant application (I think) as a way to show the long-term commitment to the site. This match, plus staff time, is implied but not monetized. Having the cash usually helps us procure grants instead of being reliant on "in-kind" match.

The work at Somme has a long history. Two hundred or 2,000 years ago, if you stood on a highpoint of the gently rolling Somme Prairie, you would have seen rich treeless grassland rolling to the horizon – to the south, the west, and the north. To the east, you would have seen a mile of prairie before your gaze reached scattered savanna oaks and some denser woodland on the moraine top (now Waukegan Road). Today from that same spot, to the east you see forest preserve. To the south, west, and north, you see businesses, a post office, billboards, busy roads, and homes for people. Many of those people are glad a prairie survives and can recover.

The tallgrass prairie was the richest ecosystem in the temperate world - in that it created the richest soils for agriculture, and today those soils feed people around the world. In many Illinois counties that were entirely prairie, not a single acre survives. The survival of any prairie at Somme is something like a miracle.

Forty years ago at Somme, two acres of very high quality prairie remained, in scattered, shrinking patches - as invasive brush closed in. Prairie species need full sun. They don't survive under trees. Many animal species were already gone; large and mid-size animal species are not sustainable in a two acre habitat. All surviving prairie plants and animals back then, as you can imagine, were shivering in fear.

The Forest Preserve staff, at that time, had no plan to rescue it. We volunteers, when we first started to help out, had to learn what to do. Our best coaches were Dr. Robert Betz of Northeastern Illinois University, the staff of the Illinois Nature Preserves Commission, and Forest Preserves nature center director Chuck Westcott. They all said: "cut brush and burn." In the absence of fire, brush kills every grass, flower, bird, butterfly, and nematode of the prairie. For forty years, volunteers cut shrubs and trees. We concentrated on expanding the biggest and best quality openings. We lost some. We didn’t have as many volunteers (or as much fire and seed) as we needed to make faster progress.

By 2010, Steward Laurel Ross and the volunteers of the North Branch Restoration Project had about thirty acres of prairie under restoration. But forty acres were still under shade. Volunteers are mighty, but we are spread over many sites. Thousands of generous friends and neighbors have contributed here, from a few hours to hundreds of hours each, but we had only been able to do so much.

Increasingly in recent years, Forest Preserve staff have focused resources on Somme. In 2014, President Preckwinkle and the Forest Preserves board approved its "Next Century Plan." By 2020, as a result, there should be no brush in Somme Prairie. This is huge.


Birds of the eastern grasslands, as a group, are the most threatened birds on the continent. A healthy prairie needs its birds, but Somme had shrunk too small. The basic bird-conservation objective here is a large and unbroken grassland of good structure for breeding prairie birds, especially Henslow’s sparrow, dickcissel, sedge wren, savanna sparrow and possibly meadowlark. Currently no prairie birds nest in the Somme Prairie fragment. But with increasing size and quality, breeding birds can be expected, in time. Currently, some prairie species breed at Air Station Prairie (a few miles to the south) and Willow-Sanders preserve (a few miles to the southwest).
Grassland areas the size of Somme have significant contributions to make. There are potentially about 100 acres of quality prairie habitat here, if we remove the brush barrier that separates Somme Prairie from formerly contiguous habitat in Somme Prairie Grove east of the Metra tracks. Recent studies suggest that smaller suburban grasslands are especially good for some species. The proposed work at Somme could combine with, inform, and inspire similar work at scores of existing and potential grassland bird breeding sites in the Chicago Wilderness region.

Would we also be wise to save shrublands here? Many shrubland species are in trouble too. But the experts today decided, no. For a site of this size, a single focus on grassland bird habitat is far superior to a compromise that would attempt to restore both grassland and shrubland. Other sites (including the adjacent Somme Prairie Grove) are successful and superior for shrubland bird conservation. More importantly, shrubs (and the predators they harbor) are a major threat to grassland birds. The best strategy here is for the entire site to be restored as it was – prairie.
After trees and brush have been cleared, it’s still a lot of work to eliminate such malignant invasives as crown vetch, reed-canary grass, and teasel.

But the major threat here is shrubs and trees. When just a foot or two tall, a few shrubs are not in themselves a detriment to the grassland birds. But, in two or three years, between burns, woody plants with well-developed root systems grow and shade out the grass and wildflower plant diversity that make for successful grassland bird nesting habitat. The plan treats shrubs, trees, invasive weeds, and seed planting in a step-by-step process.

We then crossed the Metra tracks and visited the 85-acre Somme Prairie Grove (adjacent to the east) and considered relationships between it and Somme Prairie. A coordinated plan for the two preserves makes sense. The prairie portions of these two preserves are divided from each other by the North Branch of the Chicago River (which flows unnaturally in a deep, straight ditch) as well as by the Metra right-of-way. Neither the ditch nor the tracks would impede prairie birds from using both sides as one larger grassland.
A special feature of Somme is a continuum from quality prairie to quality savanna and shrubland to quality woodland as we go east through the 695 acres of Somme and Chipilly Woods. The restoration of such a rare continuum would benefit birds, plants, invertebrates, and the ecosystem generally.

We were entertained during our walk in Somme Prairie by a merlin (an uncommon mid-size falcon) which was being mobbed by blue jays in between bouts of the feisty merlin harassing a kestrel (a smaller falcon) and a sharp-shinned hawk. Perhaps this performance was a good omen for our bird conservation planning efforts here.

The planning session on bird conservation was assembled by Becky Collings and Laurel Ross. The full roster for that field meeting included:

Volunteer steward Laurel Ross has also long been a conservation leader as staff of The Nature Conservancy and the Field Museum. She is also a member of the Conservation and Policy Council that helps guide the implementing of the Forest Preserve's Next Century Plan.

Some photos that show the process.
The transformation of Somme Prairie started to become visible from Dundee Road on December 13th, 2018 with step one. A large "mower" chopped up the understory brush, as shown below: 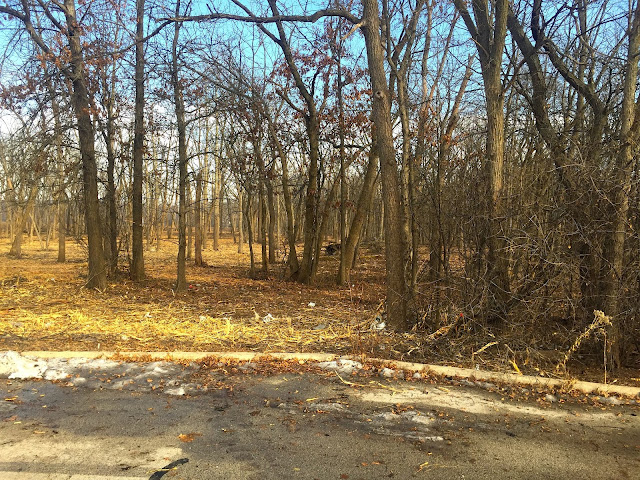 Above, from the Post Office parking lot, the chopped up remains of mowed brush on the left, compared to a still untreated area on the right. Following the brush and tree clearing, rare locally-collected prairie seed will be broadcast. Staff and stewards will combat new infestations of invasives. The ecosystem is temporarily in an "intensive care" stage. In the future, when the scene is all waving flowers, grasses, butterflies, and birds, people will find it hard to believe that the prairie was for a time reduced to this.

Beyond those already mentioned in this post, as always, there are many more who deserve recognition. To mention a few, let’s acknowledge:

John McCarter, Wendy Paulson, Arthur Velasquez, and Eric Whitaker: co-chairs of the Next Century Conservation Plan Commission – along with the scores of people who contributed to the planning process. And forest preserve President Toni Preckwinkle who coordinated the adoption of the plan.

Dozens of Forest Preserve staff and contractors as supervised by John McCabe who has much upgraded the professionalism of the Forest Preserve’s Resource Management Division.

Volunteers by the hundreds, including Somme Prairie co-steward Lisa Musgrave and Eileen Sutter who, with many leaders and volunteers, has headed up the seed-gathering crews of the North Branch Restoration Project.

Jeanne Muellner who took the great photos of the Henslow’s sparrow and the dickcissel at Orland Grassland, where they both thrive in restored habitat.

Thanks for proofing and edits to this post to Becky Collings, Troy Showerman, Lisa Musgrave, Eriko Kojima, and Kathy Garness.

For an introduction to Somme Prairie Nature Preserve, check out captions and photos of Somme Prairie from a walk in late May - and a set of very different photos and comments from July.

For a summary of the Somme Prairie plan, see: fpdcc.com/spnp

Here's a summary of Henslow’s sparrow biology and conservation

Conservation of the Chicago Region “Bird Conservation Network” birds of concern is at:
https://www.bcnbirds.org/trends13/concern.html

The birds of conservation concern in the Somme preserves:

Prairie birds currently breeding in Somme Prairie include none at all, for decades. The pitiful fragments of surviving prairie were too small. Thanks to all who are helping the recovery of the plants and animals of Somme Prairie.