So Very Sexual, Wholesome and Fulfilling

Linda, the Steward of Somme Woods, had enlisted me to help broadcast seeds of wood rush (Luzula multiflora). We also bagged seeds of the invasive reed canary grass, to removed before they spread. 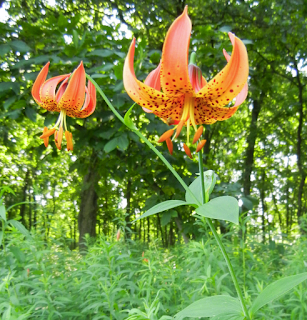 The show started when we paused in awe by a scene neither of us had ever witnessed – a stand of more than thirty Michigan lilies blooming in this open woods. While we admired the plant jewels, an animal gem swept in. The female humming bird paused at each lily to slurp nectar and catch a bug or two before shooting almost faster than the eye could follow to the next flower – to hover below, then above, then try another angle, then move in to drink and eat.

The first hummer we'd seen in the gradually recovering Somme Woods. But then the whole scene went up for grabs as a male hummingbird joined the nectar party, then launched a spectacular courtship dance. He swooped like a feathered roller coaster. The U-shaped flight path took his tiny self repeatedly from the tree tops, down through the lilies, and back up to the tops again.

Over and over he careened, back and forth, up and down, filling the entire opening, making this bit of woods a work of art, a happening. He owned it. During the swoop he’d turn his brilliant ruby throat into the sun for iridescent explosions. And sing a metallic song both faster and octaves higher than Charlie Parker. 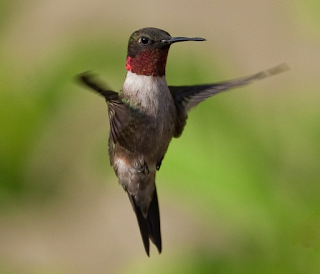 Then the two hummingbirds vanished, perhaps for love, a nest, two eggs and babies. And even in their absence, our two human hearts and minds continued to swell.

Those lilies and hummingbirds were bursting with life here for a reason – and because of us. Don’t look today in the average woods for such birds and flowers. For millennia such life filled oak woods by the millions. But in recent decades, lilies have declined almost to nothing. Invasives have made the woods too dark for them. Once nesting principally in open woods, hummingbirds are almost unheard of in tallgrass woodlands these days. Hummingbirds are co-evolved with some of our most impressive flowers – mostly red or orange ones – lilies, fire pinks, columbine, wild coffee, cardinal flower, figwort. You don’t see great stands of these in the woods any more – for the same reason the oaks are not reproducing. Too dark. The malignancy of invasives – and lack of fire – and too many deer had indeed driven out most species of flowers, and grasses, and butterflies, and birds, and so much more.

Thus, our emotions is being privileged to witness this breathtaking performance: we felt gratitude from the forest. This drama meant success. Linda and many volunteers have for decades cut the invasive trees and burned them in bonfires, stamped out the herb invaders, gathered and broadcast the seeds of hundreds of displaced plant species, many of which barely survive in today's "preserves." Here we planted lilies, fire pinks, columbines and all.

With this performance, the woods thanked us for the controlled burns, which helped the fire-adapted species to thrive, and thanked us for fewer deer. Our advocacy supported the deer-control programs that are increasing in the forest preserves. But for most sites, the lilies and hummingbirds are still gone.

Most of this region's scattered reports of humming birds during the breeding season are of vagrants, hanging around for sugar water from red plastic dispensers on patios. Today's ruby-throats were fully natural (and much less subject to neighbors’ pesticides) in their ancestral place.

We thank the forest preserves, the hummingbirds, the lilies, and you too, assuming, dear reader that you're a steward or supporter. What a pleasure and an honor, to share such victory!

Despite a zillion ruby-throated hummingbirds on YouTube, I can’t find a video of the mating dance. Can you? We’re reduced to diagrams. Too fast to follow without radar? Still, in this age, the hummingbird acrobatics is a drama where "you have to be there."

Photo of Michigan lily in Somme Woods by Lisa Culp. The hummer is from Steve Creek Outdoors.

This blog subsequently posted later reports on hummers, for example in 2019.
Posted by Stephen Packard at 12:09 PM 3 comments: