Every year, one day is most important to a prairie - bar none.
That's the day it burns.

Fire is so important to ecosystem sustainability that "evolutionists pray for it."

Usually a burn is planned for about half of each of the three Somme restoration areas. The principle is that half is left unburned as habitat for rare animals that may be sensitive to fire.

This year was the time for the west half of Somme Prairie to burn, and that's where we'll look next year for all the rarest plants to do best - for the richest wildflower displays and most butterflies. That's where we'll see wholesale reduction of some invasives and the best advances in diversity and health.

Burns are good.
The fuel is cut and blown out of the break by leaf blowers. The whole process is carefully planned and carried out.

On somewhat of a cool and damp day, this fire through average to light fuels was easy to control - yet making life and death difference for the plants and animals of the prairie. (These first two photos courtesy of Troy Showerman, burn boss for the fire. Troy, thanks a little for the photos - and a huge massive lot for the burn.)

The next photos were taken on the following day - the black aftermath. The quick fire may be colorful and dramatic, but what counts is the long-term work the fire does.
In the sedge meadow, above, if you kicked at the char, you'd find that a couple of inches of unburned vegetation survives under the black in many places. Some people argue that the best plan is to burn the whole site every year under moderate conditions in fall. You can see how that might work in this photo. Their argument is that plenty of habitat for rare animals survives in unburned vegetation or just "randomly" missed patches, also seen above. Most land managers recommend: burn half; leave half unburned. 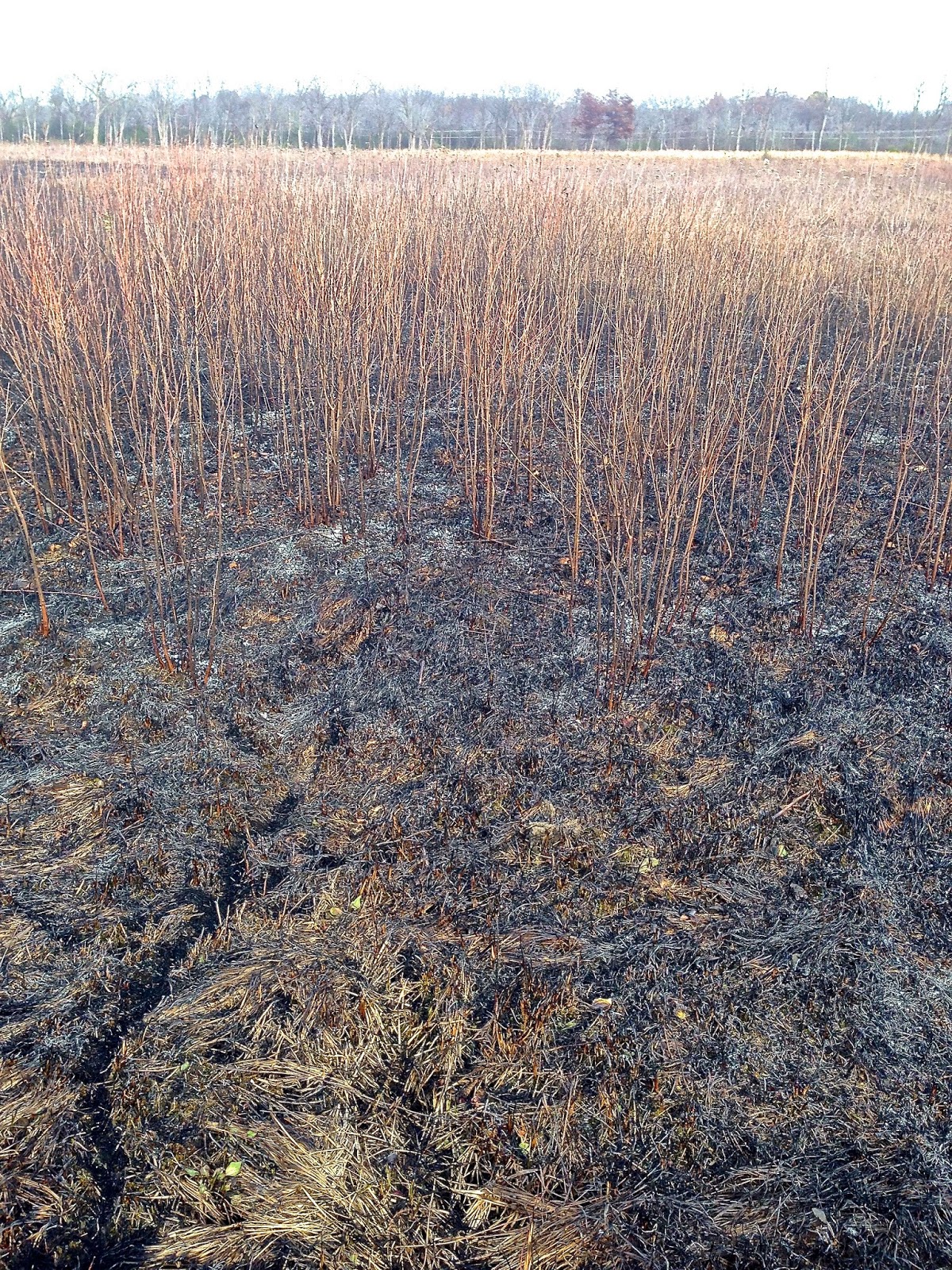 Here we see a shrub patch that the fire has top-killed. The invasive dogwood shrub would destroy the prairie by its shade without fires. The dogwood will re-sprout from the bottom next spring. But it has lost its edge, and frequent burns in some parts of this site have demonstrated that the high quality prairie can completely out-compete the dogwood if the burns are frequent.

Burns reveal the structure of the ecosystem - like an X-ray. Here at the edge of the sedge meadow, vole tunnels can be seen running from the tall grass into the drier dogwood thicket. Before the burn, the vole tunnels (foreground) were invisible. Only the sharp-nosed coyotes knew where they were. Now we see them everywhere. 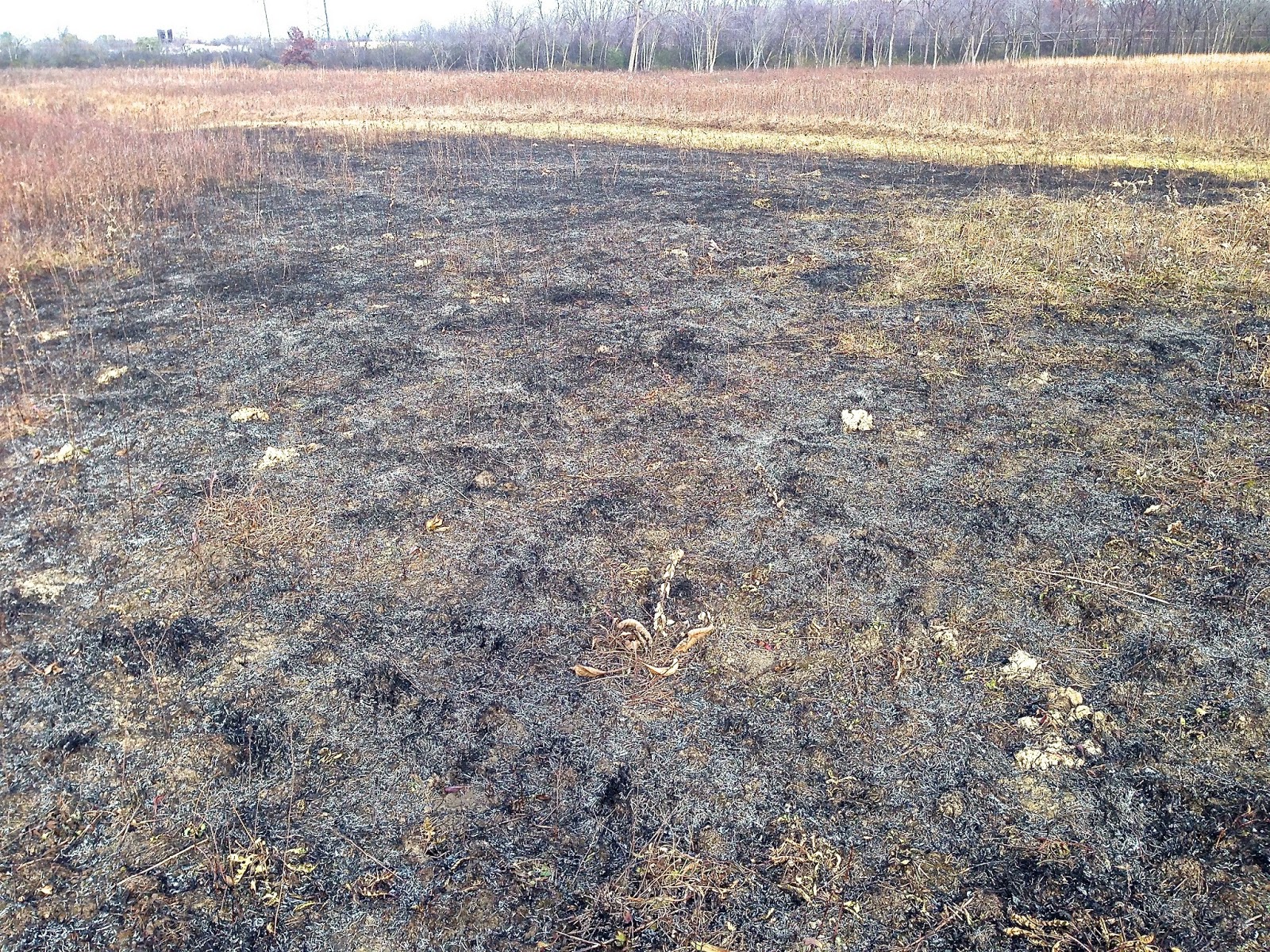 Another "X-ray." The white clumps are recent excavations of sub-soil from crayfish burrows. This shot in from the highest, driest ground on the site. But the ancient crustaceans are tunneling from the water-table to the surface everywhere.

The photo above shows an area that the Illinois Natural Areas Inventory (1970s) rated as "high quality" (Grade B) prairie. (Grade A = "very high quality.") It has diverse conservative species but not Grade A structure. The assumption was that this area had been subjected to excessive grazing by cattle or horses at some point - but that with Grade A prairie right near by, it would recover on its own in time.  Yet after three decades of burning every couple of years, it doesn't look all that much better. Perhaps it needs seed restoration with some of the taller conservatives, like dropseed grass, prairie clover, and others, the seed of which "don't get around much anymore," by itself.

Prior to the burn, the crew mowed and raked a firebreak through the center of the site. The burn is started as a backfire, so it burns slowly away from the downwind edge of the intended unburned area. Fire does not burn one foot beyond where it's supposed to.

Now we can see the under-the-grasses architecture of our little hamster-like, gerbil-like meadow voles. Their otherwise invisible influence is massive. Although they're the main food of coyotes, red-tailed hawks, and many other predators, some people speculate that voles are a lot more common than they used to be. They seem to destroy all the seed of some conservative species every year. Perhaps an unbalance has been created by the loss of other predators (for example weasels, big snakes, short-eared and long-eared owls). Or could it be that the problem is that we leave voles half the site to hide in after the burn? Perhaps they were less common when the burn patches were bigger?

Another concern of many ecologists is the loss of the shrub communities in prairies, savannas, and oak woods. This thicket of dogwoods and willows won't burn unless there's a fire during very dry times. These wet shrub thickets seem crucial for some rare birds and other animals. 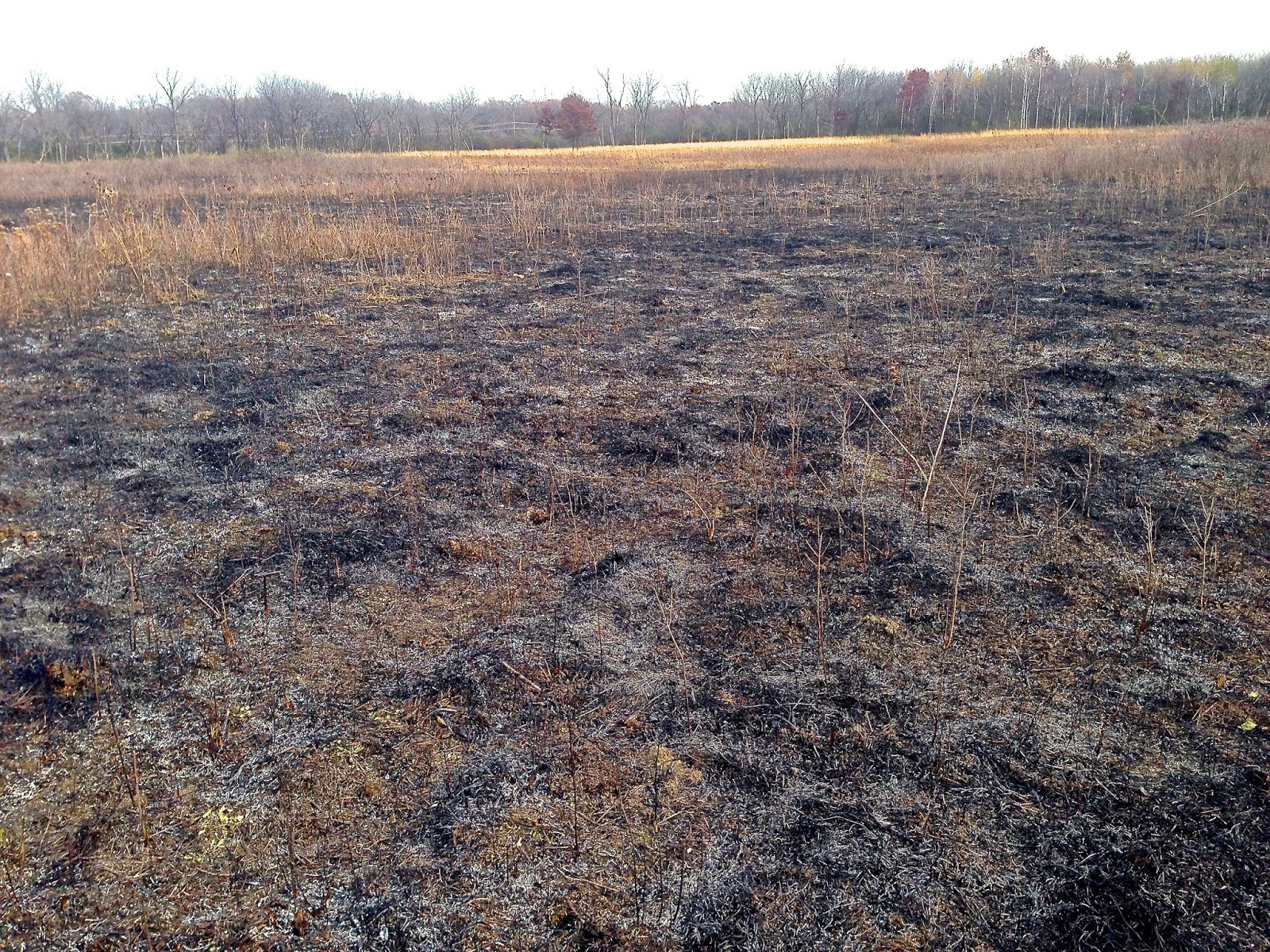 In the northwest corner of the prairie is a large area that is shrubby throughout. If left alone, these little shrubs would grow up and wipe out all prairie plants and animals. With regular burns and seeding with more diverse conservative plants, the prairie will win. It's a long process and needs the help of many stewards, but it's worth it to restore size and quality to at least a few fine eastern tallgrass prairies, which otherwise would be gone from the Earth, with all their biodiversity.

As they grow annually larger in the absence of fires, dogwood thickets kill the grass and wildflowers, the dried remains of which fuel the prairie's health-restoring fires. Once the shrubs get this big, they can be removed only by "catastrophic" fires under extreme conditions - or the laborious work of people like you and me. Frequent fire is the better option.

Here's what a piece of the unburned eastern section looks like. The fine low grass is the conservative prairie dropseed. The green patch in the lower left middle is a young buckthorn. Without fire, in time it would destroy the whole ecosystem.

And because a clear vision of process and potential is crucial to understanding and caring for the prairie, here's what Somme will look like at the height of next summer. We burn the prairie for hope, happiness, and the future.

I would not try to alter your small unburned patch of dry prairie.

Fire is a strong selective force in that it rewards those individuals which recapture energy and go dormant before burning occurs. Simply stated, fire selects for individuals that create better conditions for fire.

The smaller fuel loads in dry prairie create a smaller selective force so plants may not find it as advantageous to prepare for burning. In dry prairie the advantage to the plant may be shifted to reducing the intensity of fire and retaining biomass because the thatch helps prevent the loss of vital soil moisture.

This discourse is supported by observations of plants in my garden. Carex tetanica, which typically inhabits moist prairie, has leaves that are thoroughly dried and ready to burn at this moment. In contrast, the closely related and difficult to distinguish Carex meadii, which typically inhabits dry prairies, has more green in its leaves and would not burn as vigorously.

Another good example of a prairie species that needs fire but does not really love it is Phlox pilosa. The local ecotype Phlox pilosa plants in my seed garden are still green at this moment. They also sprout early in spring before fires typically occur. Both of these habits indicate that this strain, if not the species as a whole, does not love intense fire.

Consider that even though some fuel in the dry knob remains unburned, the hot gases from the surrounding fire are wafting over the area knocking back any woody vegetation that dares to grow too tall. In this case, the burn upwind of an area may be more important that the burn through the exact spot. This is likely the reason your wet thicket has been maintained in shrubbery. If the fires stopped then shrubs would lose the advantage to trees over time.

In conclusion, I would not look at the lack of fire through your little knob of dry prairie as damage caused by human usage. I would look at it as a planned paused in the symphony of nature.