A Second Chance for the Fringed Gentian (Gentianopsis crinita)

There were none surviving in our area when we started learning to be forest preserve stewards in 1977. Early botanists Higley and Raddin considered fringed gentian (Gentianopsis crinita) to be "frequent or common, locally" in 1891. Herman Pepoon documented populations in the north suburbs in his 1927 flora, but he called it “doomed by its beauty,” noting that it was “rapidly vanishing before the onslaughts of the commercial flower gatherer.  Not one today where there were hundreds when the above was first written.” 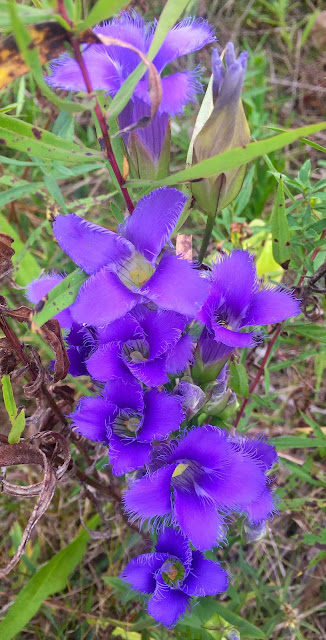 As we worked to restore nature, we looked for all the missing plants that used to live here. We found seed sources nearby, for example along the railroads, which harbored a great many of the rarest plants, and we found most species, but we never found a fringed gentian.

In 1979, we gratefully harvested six gentian seed capsules from Markham Prairie with the approval of Dr. Robert F. Betz, its steward and our mentor. Actually, we asked Dr. Betz to “borrow” that seed.

We spread the seed in what looked like a good area of Miami Woods Prairie. This plant is a biennial. That is, in its first year it grows just a little "rosette" of leaves that lie flat on the ground - and saves energy and nutrients in its roots. Then in its second year, it puts up a flowering stalk and, if all goes well, makes a lot of seed and dies. Only the seeds live over that winter. And thus, at Miami Woods, the miracle occurred, and in 1981 one hundred and fifty seven gentian plants bloomed – a triumph!

Then tragedy – the deer quickly ate more than half of them. (In later years, I think we would have scattered the seeds around more - rather than putting them all in one patch.) But, somehow, the deer didn’t continue on to eat the other half. So we ended up with hundreds of capsules – enough to repay Markham and Dr. Betz and to spread the seed widely in three other prairies: Bunker Hill, Wayside, and Somme Prairie Grove.

In 1982 we noticed no gentians. Was that early success a fluke? But in 1983 we found them blooming in all four preserves. Small numbers only. But they offered hope.

I began to monitor the gentians annually, when I got a chance. The numbers below describe the beginnings of the gentian’s second chance – in the North Branch preserves.

In his 1910 wildflower book, Chester Reed wrote that this gentian “because of its exquisite beauty and comparative rarity, is one of the most highly prized of our wildflowers.” Then, after a few lines of poetry, he went on to write, “The Fringed Gentian is rather a fickle plant; we may find it in a certain locality one year and then search in vain for it for the next few years.”

Ahh, yes. This handsome character is unusual among the conservative prairie flora. It is a biennial. Most often when we find it, every plant nearby has deep perennial roots or fat tubers that tide plants over in times of drought or deer onslaughts.

Fringed gentian is a gambler. The seed lies in the soil until each smart little embryo somehow senses the time is right. How does it predict the rains? Or does it wait until nearby plants have been weakened by something? Or what is it that triggers the germination of these seeds?

In any case, unpredictably, our fringed beauty was now “off and running.” But did we have a problem - as a result of starting with just six capsules? How much genetic breadth was among them? Dr. Betz used to tell us how striking it was that this gentian came and went – often showing up in very different places from year to year. We had a start with one source. We should keep working to find other sources.

Fortunately, we learned from Barbara Turner that years ago some Long Grove folks had “rescued” fringed gentians when Chevy Chase Prairie in nearby Buffalo Grove was destroyed. It’s worth noting here the significance of those Long Grove folks. When Barbara Turner was a young woman, she took a course at the Morton Arboretum, where she met the great May Theilgaard Watts. Watts – like the visionary landscape architect Jens Jensen – had Danish heritage and brought to America the treasure of Scandinavian nature culture. Barbara often quoted Watts; when doing so she showed a reverence in her tone and expression. I would like to include in this post copies of two beautiful letters Watts wrote to Barbara (in the 1950s?). She gave me copies of those letters, but who knows where they are in all my piles of stuff. For now, it will have to suffice that, from memory, I can say that Watts visited the Long Grove woods and its people. She praised and encouraged those folks. That community in support of nature was still thriving in the mid 70s when Chevy Chase Prairie (said to be the finest black-soil surviving in Illinois) was intentionally bulldozed by its owner. Those Long Grove folks rescued many species from bulldozed piles of prairie turf, including gentians, and brought them to prairies they were restoring. Thus it came to pass that the great Barbara Turner (heroine of other stories that need to be told) gave a second source of local fringed gentian seeds to us. So now, the North Branch gentians are a mix of Markham and Chevy Chase genes.

Over the decades, I stopped finding time to monitor gentians, but I'd check in on them occasionally at Somme Prairie Grove, where I was now steward. Somme's fringed gentians seemed to be entirely absent some years – and just a few in the others. So when Lisa Culp Musgrave started visiting Somme and becoming a fine photographer there, I asked her if she might like me to teach her how to be a steward for one of our most photogenic plants.

She hesitated – and then plunged in. Starting in 2008, she first made six deer-exclusion cages and placed them over six big and beautiful gentians, as I had suggested. (We noticed that the deer had already eaten many that year.) Too excited to stay away for long, Lisa returned soon to check her work.  She found that all six of her caged beauties had been cut down and killed by voles. But she had seen the vole-exclusion cages that I had been using to protect a related species (the prairie gentian, which we had even fewer of), and she started making many vole excluders to protect the smaller (but now even more precious) gentians that were still uncut and blooming hopefully. With the double caging, many happily set seed. That fall, Lisa and I triumphantly broadcast some of the matured embryos in places where the existing flora suggested they might do well. The results are apparent in the graph below:

Actually, truth to tell, Lisa did such a splendidly spectacular job on the gentians that I started feeling weird about it. We had so many other species that were so much rarer and needier. I feared I’d misled her.

When Lisa tells the story, she claims that I gave her a trivial exercise to see if she was any good. That’s not right, although I suppose it is true that I didn’t want to turn over my work on “super high priority” species to someone I hardly knew. In any case, now I had to convince her that she was carving out so much more time than I seemed to have – and was doing so much better a job – that she really, please, should do less gentian work and, pretty please, take over the federal endangered prairie white-fringed orchid. The great Lisa Culp Musgrave is now famous as an orchid steward; that Somme drama is described at:
http://vestalgrove.blogspot.com/2012/09/leave-nature-alone.html.

And her gradual moving on from the gentian provided another experiment. Could this formerly doomed beauty, with its numbers well bulked up, then make it on its own?
I have no great confidence that this fickle species will be permanently part of the Somme ecosystem. It may or may not. At this point, our fringed gentians seem to do well some years in two very different situations. After we’ve cut the brush in a semi-wet area, now with very low competition, it can bloom by the hundreds, if some steward takes the trouble to harvest some seeds and broadcast them. But also in some years it does well in certain of our very highest quality areas, where you'd think competition would be the most challenging.

Could it be that, once we get some seeds waiting in the soil, this once common species will thrive in now-rare high-quality wet-ish prairies and open woods?

In most recent years, we haven’t found time to monitor them. Lisa's been busy. I've been busy. But other folks have pitched in from time to time. In 2011, we did monitor, and we found 194. In 2014 it was 845. Then this year, after no counts for two years, we found 415 in a dozen widely separated areas.

The clock is running, and it’s still early in the game. This population is only 34 years old.

It's been a pleasure. Bless them.

PS: If you’d like to read about these gentians in spectacularly more technical detail, a more detailed gentian post that covers additional questions is at Somme’s “less fun blog” – Strategies for Stewards: http://woodsandprairie.blogspot.com/2017/11/fringed-gentian-genetics-techniques-and.html.
Posted by Stephen Packard at 7:06 AM