MADE FOR EACH OTHER: bird and flower 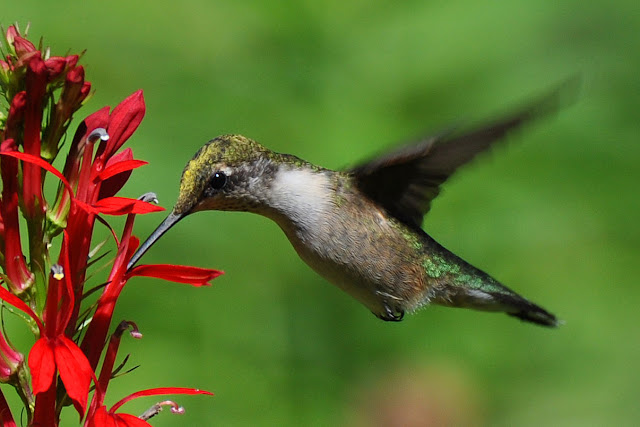 Like the glass slipper that fit the princess, this flower fits this bird.

a female ruby-throated hummingbird works a cardinal flower. Their co-evolution goes back millions of years.

Insect eyes don’t see red. Red means hummingbirds. Most flowers are blue or yellow or white and pollinated by insects. Bugs have done that job for more than 200 million years. Nectar-feeding hummingbirds have been in action for 30 million. (It took a while for dinosaurs to get this small.)

Until this year, no hummingbirds nested in Somme Woods for decades. Invasive brush had wrecked the habitat. Now that we're restoring health to that ecosystem, the hummingbirds finally returned to give us their seal of approval in 2012.

Cardinal flower pollen seems to travel from flower to flower on the tops of hummingbird heads. I can’t find any published reference to this arrangement, but if you doubt, look below. Each separate flower is topped by a long tubular structure that ends in grayish white reproductive organs. To appreciate the sequence of five photographs below, watch that structure in relation to the bird's head. 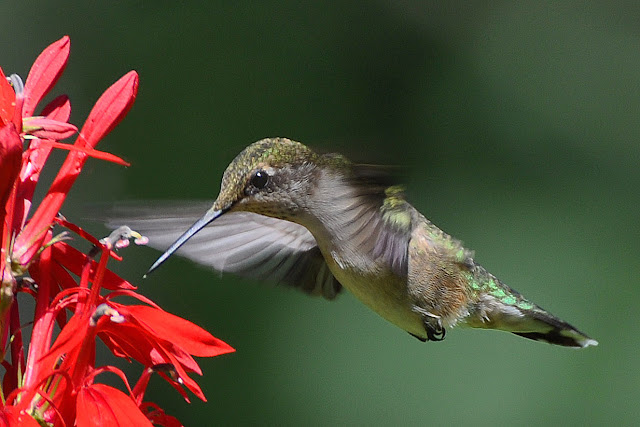 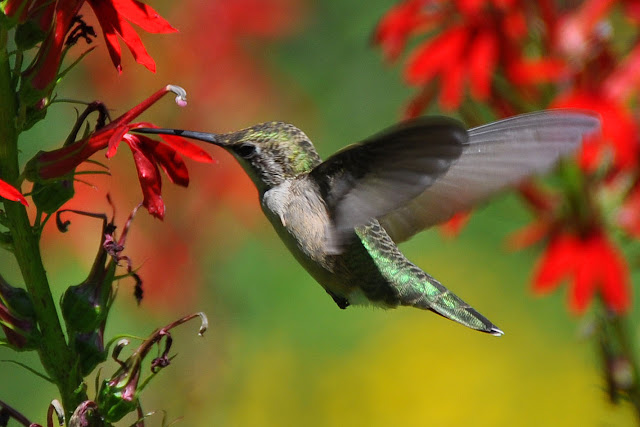 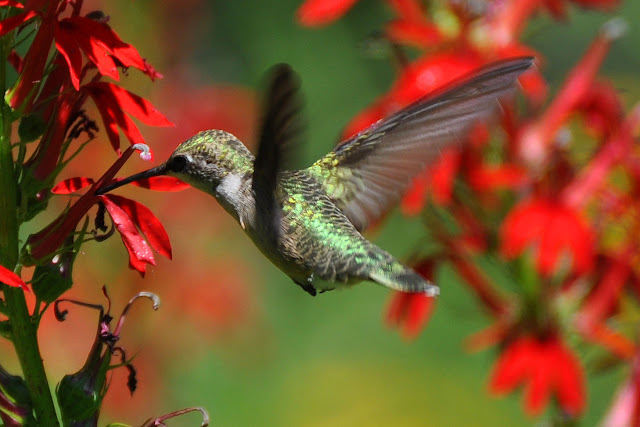 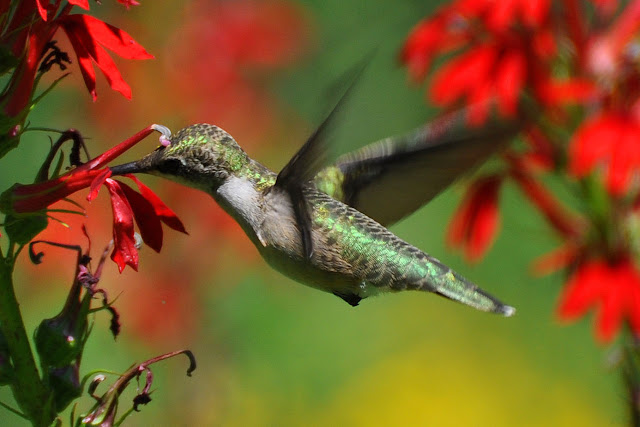 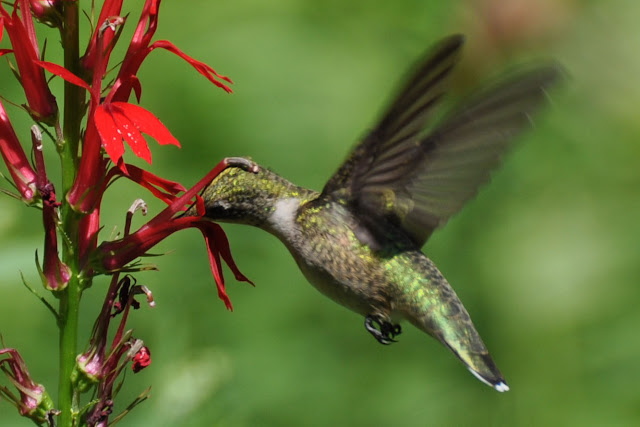 Indeed - like the glass slipper that fit the princess, this flower fits this bird.

Adaptation. References say that it’s “costly” for a plant to develop a pollinating relationship with hummingbirds. Cardinal flower (Lobelia cardinalis) is the only one of the 19 lobelia species in the eastern U.S. that has done it (others are blue). In exchange for moving pollen to ovaries, the bird requires a great deal of nectar and a specialized form of sugar, and the ruby-throat is pretty rough on the plant, compared to butterflies or bees. Cardinal flowers thrive in isolated wetlands; hummingbirds fly long distances to find red flowers. Perhaps that's part of why they need each other.

Somme had five red wildflower species, spanning the seasons, and they’re all popular with ruby-throats: scarlet painted cup and columbine (spring), fire pink and Michigan lily (summer) and cardinal flower (fall). But now - the drum roll of drama: All five of these red beauties were rare, often eaten down to just leaves by over-abundant deer, until the last few years. (Deer populations have been reduced by culling and possibly disease).

Scarlet painted cup never came back. (We keep hoping to find a nearby seed source to restore it.) The other four species are now plentiful.

In addition to nectar, ruby-throats also eat large numbers of tiny insects and no doubt enrich the complexity, health and balance of the woodland ecosystem.

Long live the ruby-throats and their red flower friends.

There is an updated version of this post - with some additional photos.

These photos were taken in Somme Woods by restoration volunteer Lisa Culp, who had a splendid time at it. She sat very still in a quiet woodland glade. The female in these photos got quite tame. (It's the male that has the ruby throat; he didn't get tame.) Part of the thrill was finding these woods rich with red flowers and summer hummingbirds again. Restoring diversity and health makes us happy.

"Lobelia flowers are bisexual; that is they produce both pollen and ovules in the same flower. To ensure that self-fertilization does not occur the stamens (pollen-producing structures) mature earlier than the pistil (ovule-producing structures), therefore the pollen grains are released before the stigma on which the pollen grains will land becomes receptive."
http://www.ntbg.org/plants/plant_details.php?plantid=7159

Posted by Stephen Packard at 9:27 AM

Stephen, You might ask Illinois Beach State Park for some Castilleja coccinea seed.

James, thanks for the good suggestion. Yet, actually, we can't use it. Perhaps a brief explanation would interest some readers. We wouldn't use Illinois Beach seeds for a number of reasons. First, we have rich soil, and we don't introduce seed from sandy soils, where we suspect the plants may have different adaptations. Second, we seek plants from spontaneous (presumed natural, original) populations from within fifteen miles. Small populations do survive in this range, and we'd hope to get seeds from them. It these days of global warming, a good argument could be made for seeking seeds from farther south, but our protocol (and thus, the definition of the experiment we're doing at Somme) is to stick with very local gene pools, if they exist. At some point perhaps that should change. But we've abided by it for more than 30 years, and we should at least study the results and consider the issues carefully before we change it.

As the crow flies, Illinois Beach State Park (from the middle) is 15 miles from Somme Prairie Grove. I too would use a more local seed source if one could be located. I do not believe Castilleja coccinea lives in my area of the county. I think most of the remaining populations are closer to Lake Michigan.

For what it's worth, we recently got seed for this hummingbird plant from a black soil prairie or savanna less than 10 miles from Somme. This is the kind of gene pool we especially want to conserve.

And in the last couple of years, the hummingbirds have also been summering in Somme Woods. Thanks to restoration, it's now open enough to have the rich, natural flora that so much of wildlife depends on. The hummingbirds especially appreciate the hundreds to thousands of Michigan lilies, cardinal flowers, figworts, and many more.